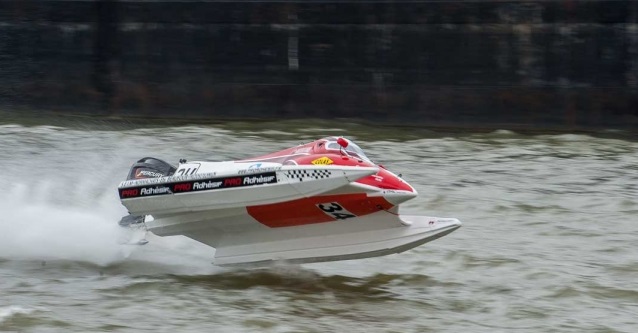 Constant rain over all three days at the fiftieth running of the 24 Heures Motonautiques Internationales De Rouen might have made working on the boats tougher than normal but it certainly didn’t dampen the team’s enthusiasm to get them to the finish line.

Of the nine teams racing in the Class Two category, four of them consisted of drivers who will be competing in this year’s UIM F2 World Championship and it certainly proved to be a weekend of mixed fortunes for them all.

Joining Team Dailly Inshore Passion, who had won the category for the last two years, was Mette Brandt Bjerknaes. Her weekend got off to a great start and after the first two hours they were leading the class. However, when they came in for the mandatory driver change they were halted on the fuel jetty for more than thirty minutes because of two commercial barges crossing just by the pit area. When they finally got back out on the course they had dropped back to fifth position. Worse was to come though as a little over the four and half hour mark the organisers brought the day to an early conclusion denying them any chance of making up the lost laps.

Also having a torrid time was the Balt Yacht team consisting of Uvis and Atis Slakteris and Stanislas Kourtsenovsky. Power steering problems had caused several delays throughout the early part of the race, and then to round off their opening day Kourtsenovsky barrel rolled the BaBa boat at the pit end turn.

Staying out of trouble was Bimba Sjoholm, who like Bjerknaes, was competing at her second Rouen 24 hours. Driving a DAC for the Olympic Team Rouennais she knew that she wasn’t going to be the quickest out on the water due to the team running a first generation Mercury Optimax engine. This meant they would only get 7000 rpm whilst the other teams would run at 8000 rpm. “There is an incredible difference in speed and that makes a huge difference over twenty four hours” said Sjoholm.

No such problems for Simone Schuft and Yvonne Koenig in Team Neptune. Confidence was really high and so was their race position, finishing the opening day sixth overall and second in class. “The weekend started very good” said Schuft. “I felt enthusiastic and was highly motivated. I had flown in directly from a business trip in Atlanta and managed to arrive exactly in time for the driver’s presentation. Fortunately there was no signs of jetlag at all, however as the first day went on I felt the flu coming.”

As Sunday morning dawned Bjerknaes and her team thought their luck would change but that early optimism quickly evaporated as after just one hour the boat was back in the pits. The transom had cracked all the way across and even with their highly experienced mechanics working flat out the job still took five hours. Having welded a bracket and bolted it onto both sides of the transom Bjerknaes went back out. “I knew that after five hours on land we had to push the boat to the maximum” she said. “I managed to shorten my times by more than five seconds a lap, plus I also recorded the fastest lap time in the team with a 1.28.03.” They finished the second day in fifth place and knew if they kept that same pace then a top three positions on the last day could just be possible. Just two laps down were the Balt Yacht Team who were finally beginning to get to grips with the conditions and putting in some fast laps.

Meanwhile in the Olympic Team Rouennais camp they were once again working their way up the leader board. The only technical problem they encountered was when the compressor failed after sixteen hours. This meant a lengthy stop of an hour which saw them loose ground on the hard charging Team Neptune.

Schuft and her team-mates were now mixing it with the more powerful Class Three competitors and would finish Sunday night leading their category by eighteen laps but more significantly third in the overall rankings.

As the remaining teams set off for one more rolling start Bjerknaes was in the driving seat. “The water was extremely rough and boats were flying everywhere” she said. The conditions were reflected in her lap times which had now dropped to 1.35.00. Then at mid-day she came in for a driver change. One hour later though the teams Rouen challenge came to an abrupt halt when the Moore barrel rolled at the pit turn. “We pulled the boat out as fast as we could and started fixing the motor, but unfortunately it had gotten compressed by the water and was beyond saving. Despite all the bad luck this weekend I’ve had a fantastic time in Rouen with Team Dailly” said Bjerknaes, “I felt really at home with this team. Chances are very good that we’ll be racing together again next year.”

Classified sixth in class, but some three hundred and fifty-one laps behind the class winner were Balt Yacht.

Third in class was Olympic Team Rouennais “I’m extremely happy that we made it to the finish with the equipment we had” said Sjoholm. “I’m thinking of that old engine. The boat felt very good though and I can say that this year compared to last year, the water felt much calmer. Sure we did have luck on our side and even though we broke the compressor, we manage to be back out on water and hunt down the laps most of the time. I’m pleased to be in team OTR” she continued, “The spirit is fantastic and we shared a lot of fun during the weekend. French, Swedish, Brits and Aussies the perfect combo! This is the best practice a driver can get for a start, especially as the next race is on the tough water of Stockholm.”

Taking the fight all the way to the finish was Team Neptune, this time though without Schuft onboard. “I did my stints on Saturday and Sunday, but could not race on Monday. For me the hardest decision was not to start again on Monday and leave my turn to the fitter ones. We held the class lead for a further two hours, plus by that time we had moved in second place overall with just Team Drakkar in front of us. That was great and we were in a good mood” said Schuft.

Then the Rouen gremlins kicked in and the DAC was towed back to the pits with a technical problem costing the team about twenty laps. Once the problem had been solved it was time to hunt down the class leading boat. As the remaining minutes ticked by the team came very close to catching them, but as the chequered flag came out they were just agonisingly one lap short. “Twenty four hours is a long time to go racing” said Schuft, “then they are over just when you don’t want them to finish. Twenty four hours and all we needed was just another minute and a half.  However, we showed good consistency and proved that last year was not a ‘one hit wonder’. So now the team are looking forward to going to Poland, but I’m looking forward to having the steering wheel back in hands sooner than that.”