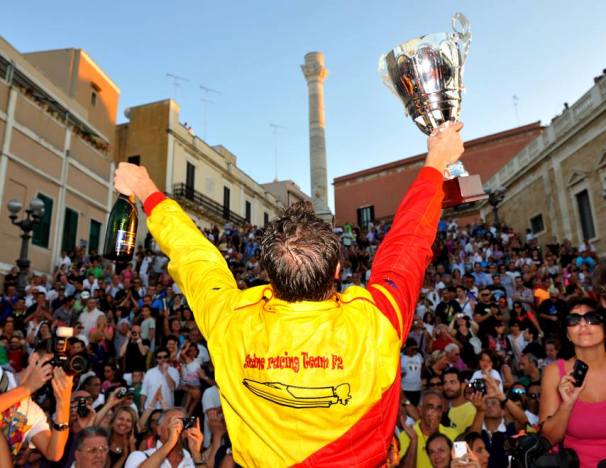 “I’m the luckiest man in the world right now” said Ola Pettersson as he climbed out of his BaBa hull drenched in sweat after winning one of the most absorbing F2 grand prix seen in recent years.

The tight confines of the Brindisi circuit was always going to produce some exciting racing and the vast crowd that stood three deep around the inner harbour to catch a glimpse of their first powerboat race certainly weren’t disappointed.

As the nineteen drivers sped from the dock it was Paolo Zantelli that hit the front after the pole man Erik Stark once again failed to get his Optimax engine to fire. Pettersson slotted into second while last night’s Match Race winner Johan Osterberg filled third place. Out after just one lap had gone Pal Virik Nilsen following a coming together with fellow BaBa driver Chiara Rossi had left him with a broken steering arm.

With the race entering its sixth lap out came the yellow flags; David del Pin making his F2 debut had taken out both buoys at the top turn and his race was run with an instant disqualification. Once the buoys had been replaced racing resumed but it seemed that no one had told Zantelli as first Pettersson then Osterberg and finally Stark all rushed past the Italian. “When I saw the green flag I just flew past Zantelli” said Pettersson, “that’s the third race I’ve past him in the restart, you would have thought he’d learnt by now, I then just pushed as hard as I could because I knew Osterberg wouldn’t be far behind me.”

To begin with Pettersson’s plan worked well and he quickly established a sizable gap over the two Swedes behind him. One concern that many of the faster drivers had voiced before the start was how to cope with backmarkers around such a narrow course. The answer was not very well as for the next three laps the leader struggled to get past Bela Cserni, each time Pettersson tried to get by him the Hungarian just shut the door on him. Once he had finally found his way past to the leaders surprise Stark suddenly appeared in his mirrors and within the space of half a lap the World Championship leader made his move to take the lead. It wasn’t long though before Stark himself hit back marker problems and once again it was Cserni who was at fault. As Stark approached the now infamous top turn he was left with no where to go and took out one of the turn buoys for which he was docked a lap. Following the race Cserni was given a yellow card by the UIM Race Officials for not obeying the back marker rules, but for Stark his podium place had vanished and he would eventually be credited with tenth place.

Meanwhile further down the field Mette Bjerknaes and Wynand de Jager were racing neck and neck and it wasn’t long before the pair had a coming together. The resulting ‘kiss’ left Bjerknaes’s Molgaard hull with a huge hole in. “At first I thought that my power steering had packed up” said the Norwegian driver, “but it was only when I started to get wetter and wetter that I realised that my boat was taking on water and that it must have been damaged in the collision.”

Back at the front Zantelli was once again coming under pressure, this time from the Austrian driver Rupp Temper. “After a very poor start I finally managed to force my way through the field thanks in part to the restarts. When I caught up with Zantelli it took one hundred and fifty per cent effort to get past him but it was worth the effort to get onto the podium” he said after the race.

Just ahead of him was Osterberg whose cautious approach to the tricky conditions finally paid off. “What a great weekend this has been, first in the Match Race and now on the podium for the Grand Prix. Both Pettersson and Stark are more aggressive racers whilst I drive with more finesse and sometimes that pays off in conditions like we had today.”

The weekend belonged to Ola Pettersson though who showed that when the conditions get tough out there he can handle them. “When Stark got past me and took out the turn buoy I yelled over the radio he’s hit the buoy, he’s hit the buoy. My father then came back and replied ‘your now back leading the race by some distance so please calm yourself down and bring this one home’. When I heard that I had won, I can’t begin to tell you how good that felt, plus I’ve never had so much champagne in my hair following the prize giving but I’m not complaining.”

Coming home in a well earned fifth place was Britain’s Owen Jelf, “It’s amazing what you can achieve with so little testing” he said. “I set the fastest lap time all weekend in this morning’s free practice, so just think what this BaBa is capable of doing once we’ve got it properly set up.” That opportunity will come next weekend when his BaBa boat will make its British debut at the National Sprint Championships. Another driver picking up valuable championship points was Bimba Sjoholm finishing in ninth place. “The low sun was causing me a few problems today and then when the screen was covered in salt spray I sometime had to almost guess where the turns were, I suppose I just guessed right today” she said.

With a little over a month to go till the British Grand Prix taking place in Nottingham, all the teams are now heading back to their bases to carry out some much needed testing before they meet again for round four of the 2013 UIM F2 Powerboat World Championship.