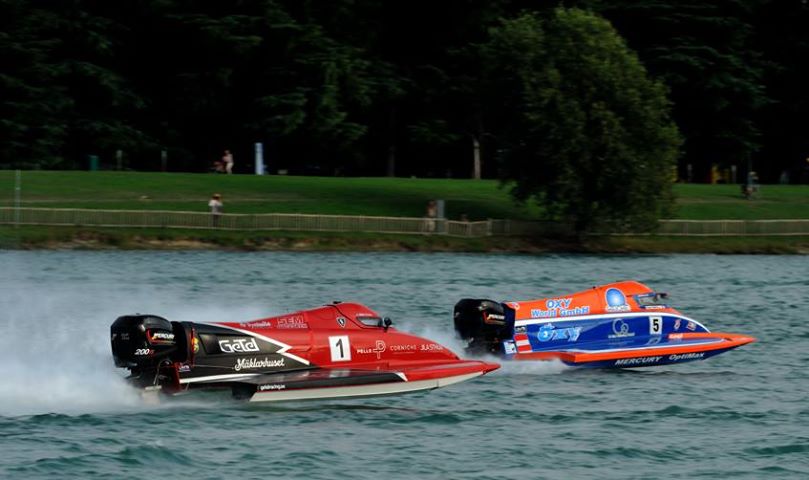 With sixteen entries all vying to become the 2013 F2 European Champion this weekend at the Idroscalo in Milan, the driver who can adapt quickest to the challenge of four heats of fifteen lap sprint racing will be a worthy winner of the UIM title.

Setting the standard straight away was the local hero Paolo Zantelli after he claimed pole position on this tricky four pin course. Finding the mix of top end speed and fast acceleration wasn’t going to be easy but the experienced Italian knew his Clerici hull would be well suited to the long straights, a feat he demonstrated recently when he won the British Grand Prix on a similar race circuit.

As the first heat got under way to the surprise of those watching from the bank Rupert Temper made a lightning bolt start and took the lead, “We always knew Rupp had the speed” said his team manger Michael Werner, “It’s been sleeping for a while, but today Rupp woke it up.” Trailing in his wake was Johan Osterberg and further back Erik Stark who had also made a great start but both him and Zantelli had to back off as the pair came very close to blowing over backwards. By the time they reached the first turn the wash nearly caught out Stark who came close to barrel rolling out of the event. In the end he managed to hang on although now minus his rear cowling. “I heard my radioman say I’d lost the rear cowling but to be honest I was just grateful no-one hit me in all that confusion” said Stark.

With Temper now holding a commanding lead over the pack the heat soon came to a grinding halt after Manuel Saueressing flipped his Molgaard hull at the bottom end turn. The driver was unhurt but with a crack appearing near the cockpit the team has now decided to withdraw from the event.

With only seven laps completed it meant that the reaming drivers lined back up on the start grid for a complete re-run. Once again Temper made the perfect start though this time it was Uvis Slakteris who would challenge the Austrian’s lead. Running into problems straight away was Zantelli when his propeller shed a blade not long after the re-start. Up in third was Osterberg with his mirrors filled by the Molgaard of Stark. It wasn’t long before Osterberg began to feel the pressure and as the Swedish pair caught up with Slakteris in the bottom turn Stark made his move. “I saw Slakteris on my right, then almost out of no where came Stark and drove around the pair of us” said Osterberg “I just went into the turn and hoped we all made it round.”

Stark was now on a charge it wasn’t long before he had reeled in Temper. “I saw Rupp he was slowing, so I thought maybe I can catch him” said Stark. What neither of them was aware of was the fact that Tempers gear-case was about to seize leaving him stranded just opposite the race pits. Osterberg now began to make his move for the lead but some defensive driving tactics by Stark meant that in the end he would have to settle for second place. “Its racing” said Osterberg “I tried to get by on the inside then the outside but each time he would block me or hose me down. We were racing on the limit but you can only do that if you trust the guy and sometimes I trust Erik more than myself.”

Third in the heat went to Slakteris who was pleased with the result. “I was doing everything right, I have the acceleration but no top end speed so I just knew those two would get past me, it was just a matter of where and when.”

As the light over the Idroscalo was beginning to fade the race officials decided that on safety grounds they should revert back to their original plans of holding three F2 heats on Sunday, so one thing is for certain whoever wins the title is going to have a busy day ahead of them.