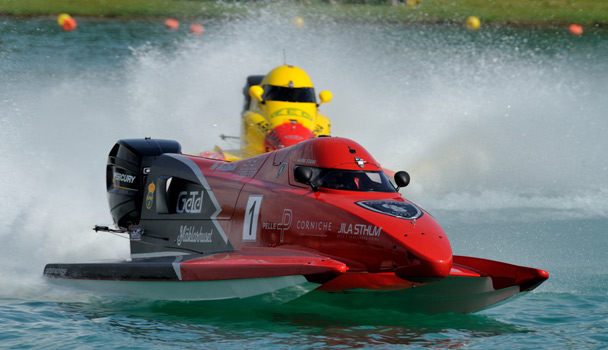 It’s a cold damp Sunday evening in Milan, Italy. The powerboat racing world should have been celebrating the fact that Sweden’s Erik Stark had just won his second F2 European Championship title. Instead the hugs exchanged in the race pits were for Paolo Zantelli’s family after the Italian driver was tragically killed in the fourth and final heat that day.

The racing accident took place just metres from the start pontoon. As the remaining ten drivers headed for the first turn Zantelli’s Clerici hull took off and landed on its side in a violent impact. The rescue teams were on the scene in seconds and extracted Zantelli who was now in an unconscious condition. An air ambulance was quickly summoned but it was decided by the Doctors treating him that he should be rushed to the local hospital via an ambulance. He later past away from his injuries sustained in the crash.

With Stark already holding enough points to be crowned European Champion, the race organisers decided to cancel the final heat, probably to the relief of those nine drivers remaining and to those watching on who had already seen Manuel Saueressing, Rupert Temper and Per Edwardsen crash out over the weekend.

Before the final heat had got under way Stark spoke about how he felt about winning his second European title and the great feeling it gave him when he crossed the line. To him it felt like winning the ‘World’ title because he was up against those same drivers that’s he’s raced against all year for the ‘big one’.

Although representing two different generations of driver Zantelli and Stark had many similarities. They both had two European titles to their name, Zantelli back in 1996 and 2001. To the credit of both racers they would often be the first to offer assistance to their competitors rather than see them stranded in the pits. You didn’t need to see their lap times on the screen to know that they were quick. They both knew of the risks they were taking as they were pushing the edge of the envelope. When you push the envelope you are challenging the barriers and sometimes when you cross that boundary failure is the likely outcome.

It goes without saying that Formula 2 will miss one of its most experience and respected racers, a man whose warm smile and Italian charm had become so familiar in the sport. So long Paolo Zantelli, gone but not forgotten.