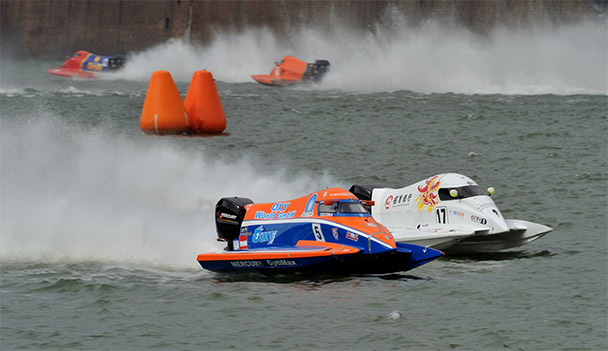 It certainly proved to be a dramatic start for the 2014 UIM F2 World Championship, which took place in Dunaujvaros, Hungary and it wasn’t just the water where the drama unfurled.

With a full field of twenty boats lined up on the start jetty it was Owen Jelf who, through the drizzle, had looked to have made the best start from his third spot on the grid. As he rounded the demarcation buoy he was obliged to leave a boats width of space which was promptly filled by pole man Erik Stark. Jelf then had his mirrors full of Rupp Temper’s DAC and it wasn’t long before the Austrian driver had past the hard charging British driver.

Just as the race pace began to settle down local driver Bela Cserni took out one of the pit end turn buoys and out came to yellow flags to bring the race down to a cautious snails pace. It then became apparent that the local Hungarian timing team were having some issues with their equipment. As the drivers were asking their radiomen for their restart positions the timing screens were showing conflicting information. The race officials had no choice but to circulate a hand written note showing each driver’s position, only it was quickly spotted that not all of the drivers still racing were on it. Once this was rectified the race finally got back under way.

As the green flag was shown Stark was hit from behind by Alain Dailly, who he had just lapped. In the confusion Temper quickly got past and took the lead. He was followed by Peter Morin and for the next ten laps the two went toe to toe. As the pair traded the lead it wasn’t long before one of them would be forced into making a mistake and it was the unfortunate Austrian who miss-judged his approach to the pit end turn, collecting a buoy and a one lap penalty in the process.

Almost as soon as the yellow lag was raised once again, Tobias Soderling barrel rolled out of the race at the top turn. Complaining of back pain they rushed the young Swede to the local hospital where it was confirmed that he had cracked two lower vertebrae and would be kept in overnight under observation.

With the time keepers still not able to supply all the necessary information the race officials decided that as there was only five laps to the finish, the Grand Prix would be concluded under the yellow flag. At first it was thought that Temper had done enough to win the race and was dully handed the chequered flag. It soon transpired that with his one lap penalty he was in fact back in seventh place and it was Peter Morin, the World Endurance Champion who had taken victory on his F2 debut.

“I drove a careful race and waited to see if the others made mistakes” said the delighted Frenchman. “Coming off the back of my success in the recent Rouen 24 Hour race, the month of May is proving to be a very special one. What really helped today was having my Rouen team-mate Philippe Chiappe on the radio; it gave me a huge advantage as he can read the water condition and tells me when to push and when to hold back because today some parts of that course were rougher than in Rouen.”

Finishing on the next step down on the podium was Erik Stark and he admitted that the Hungarian Champagne had left a bitter taste in his mouth. “In the restart I nearly went over when Dailly hit me, sure he got a yellow card for dangerous driving but he screwed up my race. I knew that I had little chance of catching either Temper or Morin without risking my race any further. These days I’m racing a bit cleverer and I opted to pick up the points. Ok I was lucky to get second after Temper hit the turn so in a little way that makes up for re-start clash.”

Taking the final spot on the podium was Owen Jelf. “I’m really pleased that finally all the recent time that the team and I have spent testing has now paid off. Last year wasn’t a great year for us because we had spent no time setting the new BaBa hull up before competing in the F2 World Championship and our results showed that. Now we are finally beginning to get to grips with this hull, although we are not going to sit back on our laurels just yet there’s more testing time on the way.”

Peter Morin not only becomes the first driver to win an F2 round using a Moore hull but he actually did it as a provisional licence holder as well. “After the drivers briefing the UIM Commissioner, Gordon Sutherland, asked all the new drivers to stay behind for some extra briefing” said Morin, “he then said ‘guys you will enjoy the race but you won’t win it’ perhaps Gordon needs a new script now for the next round in Brindisi.”