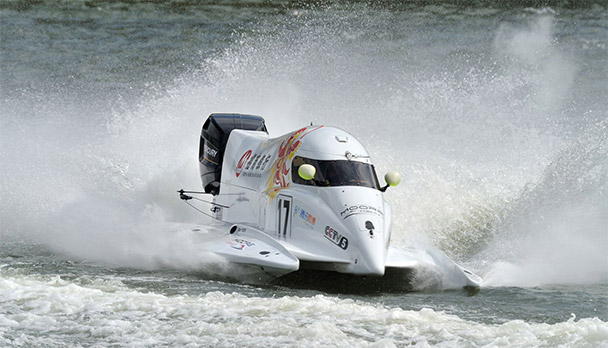 For the first time ever three French built Moore hulls are competing at a UIM F2 World Championship round, with varying degrees of success it must be said. The World Endurance Champion Peter Morin put his Chinese decaled version to great use when he qualified in eighth place on the grid. Alain Dailly reached Q2 in the qualifying stages and will start in twelfth place, but it was a tough day in her office for Mette Bjerknes. Fuel starvation issues meant she was down on power for most of the day and her pit crew now face a long night ahead as they look to solve the issue.

Over the past two seasons a driver climbing out of a bright red Molgaard hull with a huge smile on his face has been a regular occurrence in the UIM F2 pit lane, but it’s not often that two drivers using almost identical red hulls are competing for that honour.

“I’m more surprised than happy” admitted Stefan Hagin “the boat was awesome” said the usually reserved German driver. Having only picked up the latest creation from Christian Molgaard on Monday the young driver had barely sat in it before making the long drive to Dunaujvaros, Hungary. “Honestly we only came here to set the boat up and we end up second on the grid.” The condition weren’t ideal for those new to their steeds and during ‘Free Practice’ it had looked a real hand full. Adding more weight to the nose paid dividends and he was finally able to keep it pointing in a straight line, certainly a prerequisite on a two pin course. “I still can’t believe how well that went, if someone had offered me a top ten place I would have been happy with that, so you can imagine how I feel about a top three place.”

Another driver who was happy with his day’s work was Erik Stark. Throughout the day he had consistently set sub forty second lap times, the only other driver to break that barrier was Hagin. “The boat was really fun to drive” said the reigning World Champion. “Plus I really love the shoot-out style of qualifying, you’re by yourself, so it’s all about the driver, you have no excuses.” The team had obviously paid very close attention to the ‘F1H2O’ style of qualifying at the Qatar Grand Prix. “During Q1 we knew it would be rough, so we chose a propeller for those conditions. By the time you go out in Q3 the course has really calmed down, it’s almost like practicing back at home, so we ran a different prop more suited to the flat. This time it worked” continued Stark “maybe next time we will need another plan but that’s all part of the winning ingredients.”

Stark’s quest for his second Hungarian Grand Prix title was made slightly easier when his closes title rival, Johan Osterberg, was eliminated from the contest after he clashed with the Austrian driver Rupp Temper. Coming into the pit turn the Swede had tried to go around the outside but turned tighter resulting in Temper’s prop and gear-case taking off the front section of his sponson. “It wasn’t the greatest move by Osterberg, he really didn’t leave me much space to turn” said the Austrian. Osterberg felt that Temper might have been on the inside but didn’t have the overlap. “I should have known better” said the Swede “after all its not the first time I have seen him do that. I think it’s about time we start to respect each other in racing before something serious happens.”

To make matters worse just moments later Osterberg’s team-mate Tobias Soderling crashed out at the end of the straight. Fortunately the young Swede survived the ordeal and put it down to part of his learning curve. With his team-mate out for the weekend Soderling now has fifteen mechanics working through the night in an attempt to get him race ready for tomorrow Grand Prix. His accident was a carbon copy of the one that befell his namesake Tobias Munthe-Kaas in the mornings ‘Free Practice’. As the young Norwegian was running down the back straight close to the high concrete wall his BaBa hull caught a gust of wind and was over in a flash. “That’s one of the strangest crashes I have ever had” said Munthe-Kaas “it was all over so quickly I didn’t stand a chance of catching it before over she went.”

Taking an excellent third place on the grid was Owen Jelf. The British driver looked so at home in his Italian built BaBa hull testament to all the recent testing that he and his team have been carrying out back in England. He will have the Latvian driver Uvis Slakteris alongside him and next to him will be the Portuguese F1 driver Duarte Benavente. The Interpass driver is making a welcome return to F2 and felt that fifth place was a perfect start to his comeback tour. “I came here to learn about running the Mercury OptiMax so this is all new territory to me” he said “I knew there would be a strong field of drivers here all with a lot more experience of running this engine so I’m pleased with today’s result.”

Having the perfect Birthday weekend was Bimba Sjoholm. The Swedish driver had a stunning qualifying session putting her DAC ninth on the grid. She did admit that she might struggle to hang onto that position as the propellers she has here are all too short but on the positive side she said that for the next round in Brindisi, Italy she would be spoilt for choice.