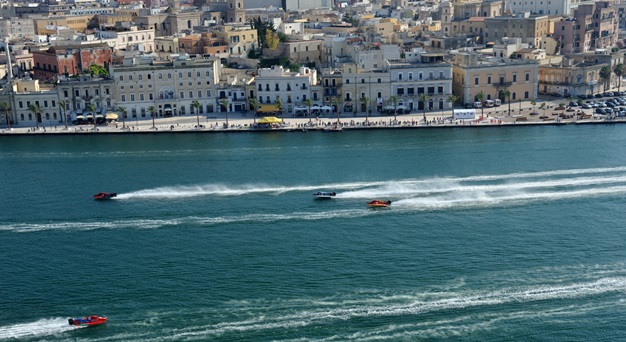 Some thirty years ago it was said that when the legendary UIM F1 promoter David Parkinson looked for race venues to form his World Championship they would have to meet with three exacting stipulations. The first being that there must be plenty of local authentic food and fine wine, the second was that a challenging 18 hole golf course with superb views must be close by and finally that the driver’s wives and girlfriends would be able to indulge in some retail therapy. How Brindisi escaped his attentions will probably remain a mystery but without doubt it would have ticked all three of his boxes.

Such was the success of last year’s inaugural Brindisi Grand Prix; for evidence of this you only had to look at the huge crowds of spectators lining the harbour walls during the early evening race, that this year’s event will be busier than ever. The inclusion of a round of the F4S World Powerboat Championships, along with the local GT15 Italian Championship plus of course the ‘grand depart’ of twenty three F2 drivers around the tight confines of the Italian harbour should provide the locals with even more thrills and spills than they witnessed this time last year.

Amongst those twenty three drivers preparing for battle in what will be a boiling hot cauldron of Adriatic turquoise blue, will be the 1998 UIM F2 World Champion Pierre Lundin. Back into F2 after spending the last ten years racing in the F1H2O series for the CTIC China Team, where he consistently finished year on year in the top ten, he will no doubt be a force to reckon with. The driver from Eskilstum in Sweden will be racing alongside Mette Bjerknaes in a brand new Moore hull. ‘We are of course very excited about the prospect of having such a familiar face racing for the team and one with such a depth of experience and wealth of knowledge should give us a huge boost” said the team’s spokes women. ‘Although Lundin is a former World Champion it’s been a few years since he’s sat in a competitive F2 boat. We’ve spent the last couple of weeks preparing the boats and motors, so they now have a completely fresh look. A new Lundin F1 Racing chapter begins in Brindisi this weekend. We can’t wait.’

Another new face this weekend will be Tomas Cermak to join the iBoat Racing Team. Like Lundin, Cermak, from Bratislava in Slovakia, is vastly experienced on the water having raced OSY 400 as a teenager. He should be used to Brindisi’s rough water conditions as he won the S2000 class back in 2003 and again in 2005 at the equally treacherous Rouen 24 Hour race. In 2010 he raced a BaBa boat for Team Nautica in the F1H2O series where he collected the only point the team scored that season. Back then his Team Manager was Emanuela Procaccini and he will be getting reacquainted with her once again as she oversees the iBoat Racing Team’s activities this weekend.

A more familiar face is relishing the prospect of getting back on the water after his flip during qualifying for the Hungarian Grand Prix in Dunaujvaros. “I have a good feeling about this race in Brindisi” said Tobias Munthe-Kaas. “After the crash in Hungary the team has done a great job to check everything in the boat is working perfectly, so it’s just down to me to deliver a good result. I really enjoy the Brindisi course, yes, it can get rough but I have raced offshore and am both Nordic and Norwegian Champion some years ago; therefore I like the rough conditions they suite me very well. Remember which boat came through to win last year, let’s hope I can make it a BaBa victory once again.”

Following his stunning victory in Hungary, Peter Morin has been hard at work testing propellers back in his home town of Rouen, France. Paying close attention to the team’s progress has been Morin’s close friend and confidant Philippe Chiappe, who’s a former team-mate of Lundin. Chiappe’s input will be crucial if they are to repeat their opening round success.

One person who is out to stop them will be Erik Stark, who last year threw victory away in Brindisi after taking out a buoy at the now infamous top turn. He too like Morin has spent several hours on his home test track perfecting his Molgaard hull ready for the Brindisi challenge.

The action gets under way with a ninety minute ‘free practice’ session for the F2 drivers at 10:00 am local time on Saturday morning. Before that the teams will be donning their finest garments for a Gala Dinner held in their honour, over looking the magnificent setting that’s hosting Round Two of perhaps the most open and eagerly anticipated UIM F2 World Championship that we’ve seen for several years now.