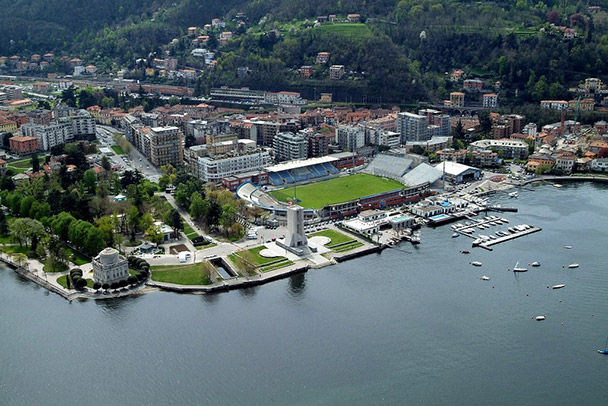 This weekend as Europe’s finest golfers gather at Gleneagles, in Scotland, reputed to be the home of golf, Europe’s elite F2 powerboat racers will be gathering in Como, Italy, said to be the home of powerboat circuit racing. Unlike the Ryder Cup though, the result of the UIM F2 European Championship is wide open with no clear title favourite amongst the challengers.

With the current European title holder Erik Stark missing from the entry list, there has never been a better time for the remaining European and Scandinavian drivers to make their mark, so dominate has Stark been in the previous years.

If you look further back in the record books you will see that Pierre Lundin won the title in 1997 and at the recent Drammen race he was involved in a spectacular flip with Stark, fortunately both drivers were ok. Since then his team has been working around the clock at their workshop in Eskilstuna, Sweden, to prepare the Moore hull for Como. “We have been through the whole boat, checking everything is just right” said Lundin. “I have raced on Lake Como before, back in 2006 at the Italian F1 Grand Prix, so I have an idea on what the conditions could be like. We have been testing some new propellers from both Dewald and WinRace and I’m confident they will suit the circuit. I am not a great fan of heat racing because it’s all about the start and if you mess that up you have no time to fix it, whereas in a longer Grand Prix style event you can often recover from a bad start.”

If he does falter perhaps it could be Rupp Temper’s year; the Austrian driver will arrive at Como in very good form, underlined by the winning performance he put in at the recent Tonsberg Batrace held in Norway. With the conditions around the 1650 metre course expected to be rough, his DAC hull will be ideally suited to the tricky waters, plus his fast starts off the pontoon will be invaluable during the four heats that decide the outcome of the weekend.

Another driver who is hoping the condition will be rough is Britain’s Owen Jelf. Last weekend he was racing at the final round of the RYA Powerboat GP 2014 British Championship, the Bedford Grand Prix. He finished heat one in second place behind the new British F2 Champion, Paul Balfour and that was enough to convince Jelf that he was all set for the European Championship. “We came here to test for Como” he said. “We tried a few different settings with the engine height and got it right. It will be rough and that suits me down to the ground.” Racing an Italian BaBa hull, he knows that he can rely on local support from the factory but was quick to point out that even though he will be competing in BaBa’s back yard, water is still water where ever you are. “With no Stark or Peter Morin its wide open this year and I’m looking for that podium place” said Jelf.

Bimba Sjoholm, who currently sits right behind him in the World Championship standings, was also present at the Bedford Grand Prix, though her place in the cockpit was occupied by Scott Curtis. “We are using this event to test various propeller options” said Sjoholm. “I’m still in the hunt for some good props, plus we have been having some issues with the engine starting cleanly. We thought we had solved the problem when we raced at Drammen in Norway. We change the starter motor there but I think we need to make further checks.”

Having witnessed Curtis crash his DAC hull at Nottingham last year she had everything crossed for luck that she didn’t get a repeat performance during the weekend. “When he suggested that we should come here and race just one week before the European Championships I was a little concerned to begin with” she said. “But I have every trust in him, plus everything can be repaired” she Sjoholm. “I’m so looking forward to Como, it could be rough, we are heavy but steady, so it’s going to be fun.”

Being an Italian event has meant that several of the home grown talent will be hoping to take the spoils of victory, amongst them David Del Pin, Chiara Rossi and Maicol Chiossi will all be looking to put in a good performance in front of a partisan crowd gathered around the shoreline. Ivan Brigada, who has twice won the Italian F2 Championship, might just surprise a few of the regular World Championship runners as the thirty four year old driver from the Lombardy region of Italy is known to be very quick in the rough and will be using the latest spec BaBa hull in his pursuit of the title. Like Lundin, he also raced at the Grand Prix of Italy back in 2006, though on that occasion his race ended in dramatic fashion when he, along with Jonas Andersson and Valerio Lagiannella, blew over backwards as they all raced for the first turn.

If it comes down to experience that wins on the day, then Johan Osterberg won’t be far from the podium come Sunday evening. The quiet Swede has made a habit of getting good results when the going has got tough, as he showed at the last F2 round in Brindisi. Only one of three drivers that finished ahead of him that day will be in Como, so the Omens may be considered good for him. He will be using a Molgaard hull that has several new modifications to the running surface which could prove decisive.

Free Practice gets under way for the F2 class at approximately 10:15 on Saturday September 27, with the first of the four heats starting at approximately17:00 that afternoon.

As the novelist C.S. Lewis once said ‘where we find a difficulty we may always expect that a discovery awaits us’ and come Sunday evening the wait to discover who the 2014 UIM F2 European Championship is will be reveled.