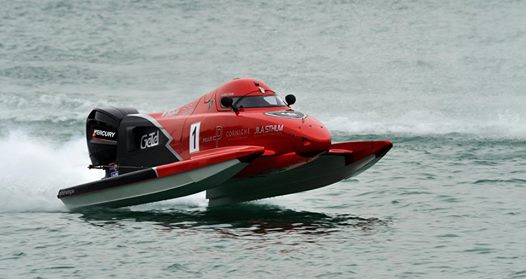 Fresh from his success at the Chinese Grand Prix earlier this week, Erik Stark showed no signs of jet-lag when he posted the fastest time in the top ten ‘shoot-out’. “That time of 35:37 made it look very easy but it was far from it” said Stark. “In this morning’s ‘free practice’ we had a fault with the starter motor and that cost us a lot of testing time.” Unable to carry out his usual thorough routine Stark had to rely on a propeller which he had hardly tested. He need not have worried because it proved quick enough to get him a place in the ‘shoot-out’ before he swapped to one that he knew would go well in the flat water conditions.

As to how he approaches the Grand Prix, Stark admitted that traffic could play a big part in the outcome. “How you deal with the backmarkers will be key to the race” he said. “All the boats have the same top speed and if they keep their racing line it’s going to be difficult to past. At the last round in Brindisi I was handed the race victory off the back of a yellow flag incident, the same thing could happen tomorrow, though you can never plan for those sorts of things.”

Lining up alongside him on the start grid is his fellow countryman Pierre Lundin who was happy with the result. “I have more work to do if I’m to beat Stark on this type of water” he said “but we are getting closer though.” With flat water conditions for Qualifying Three, Lundin was always going to struggle in his Moore hull but he knows that in the rough race conditions the advantage will swing back his way. Another advantage he has is that propeller guru ‘Mr Dynamite’ has swapped camps from Stark’s to Lundin’s. “F2 has always been about props so I hope that our new partnership will prove to be very successful.”

Making it a ‘hat-trick’ of Swedes on the start dock for the Grand Prix was Johan Osterberg, though he felt a little put out when the race officials removed his best lap time for exceeding the racing line limit. “My radioman asked if I could take a wide line for my run up and nothing was said, so I assumed it was ok as I had seen other drivers take that line at the pit turn.” In the end it didn’t matter because his second time was still quick enough for third place on the grid. “I was almost out of fuel for the shoot-out” said Osterberg “so the boat was dying in the turns, I’m so sure I could have gone quicker.”

The fourth quickest time went to Rupp Temper who knew to keep to a tight line as requested by the officials. “I’m looking to make a great start because I know this boat can be like a rocket off the line” said Temper. “My main goal though is to finish the race without any trouble.”

One driver who was disappointed with his performance was the Frenchman Peter Morin. “It’s difficult to say where I lost the time today” he said. “I made a mistake in Qualifying Three, when I tried to take too much speed into the turn. Tomorrow will now be a point scoring exercise as its vital I stay in touch with Stark in the championship race.”

Fastest lady of the day proved to be Mette Bjerknaes even though she had struggled all day with sore back muscles. “After my crash in Drammen the Doctor said I needed plenty of rest, so perhaps after this weekend I will take up his advice” she said “In the meantime I have the repercharge to take care of and lining up alongside me is Munthe-Kaas, lets hope its not Drammen part two.”