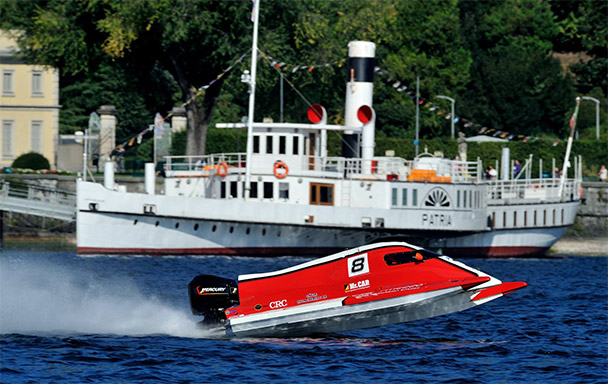 After qualifying in pole position in a brand new BaBa hull, which he had only tested for the first time two days ago, Ivan Brigada looked in confident mood when he lined up on the start pontoon for heat one of the UIM F2 European Championship.

As the red start lights went out Brigada was quickly under way but as he approached the demarcation buoy his mirrors were soon filled not by Pierre Lundin, as he had expected but by his fellow countryman David Del Pin who had made an electrifying start from third place on the grid. His race though almost came to a dramatic conclusion there and then as his boat hit a wave and nearly rolled over. This allowed Brigada to open up a small lead as the pack swarmed down the back straight. The young Italian driver than had Lundin challenging for second place and it didn’t take the Swede long to find a way past him.

With the fifteen lap heat beginning to settle down Brigada was finding the conditions not to his liking. “I kept hitting the waves rather than flying across them” he said. “We had made the wrong choice with the propeller because it didn’t give me the punch I needed to lift the boat.” By contrast Lundin looked to be on auto-pilot as he soon took the lead and then extended it to fifteen seconds before backing off with just five laps remaining. As he took the chequered flag Lundin knew that he had the measure of both Brigada and Del Pin. “I knew that Ivan would be quick but also that he wouldn’t take too many chances” said Lundin, “what really surprised me was just how fast Del Pin was. Now I’m on pole for the second heat so I have a chance to move about in the run to the first mark, because I really felt uncomfortable sat between them on the start line.”

Del Pin was realistic enough to realise that the two drivers that finished ahead of him were perhaps in a different league. “I was the first ‘normal’ driver home today” he joked, “if you had told me on Friday that I would finish in third place I would have been happy with that outcome.”

Fourth place went to the young German Stefan Hagin. He had spent most of the day struggling with power steering issues which were only rectified once problems with his alternator had been resolved. “When you look to where I started on the grid you would never have thought that I stood a chance of finishing where I did” he said. “I found a really good propeller for these conditions, it was always going to be rough, so we just used the one I had on for this morning’s session when the lake was at its roughest.”

Fifth place went to Erik Edin, who was another driver that had struggled throughout the day. “With thirty minutes to go before the first heat we couldn’t get the engine to work” he said. “At first we thought it was the Efi box that was causing us issues, but it turned out to be an injector problem. I can’t wait for the second heats because I have so much faith in this boat I really believe I can mount a stronger challenge.”

With the first of the remaining three heats starting at 11:15, ‘Free Practice’ at 09:30 will provide thirty minutes of testing that could prove crucial for those teams looking to gain that advantage in the pursuit of the European crown.