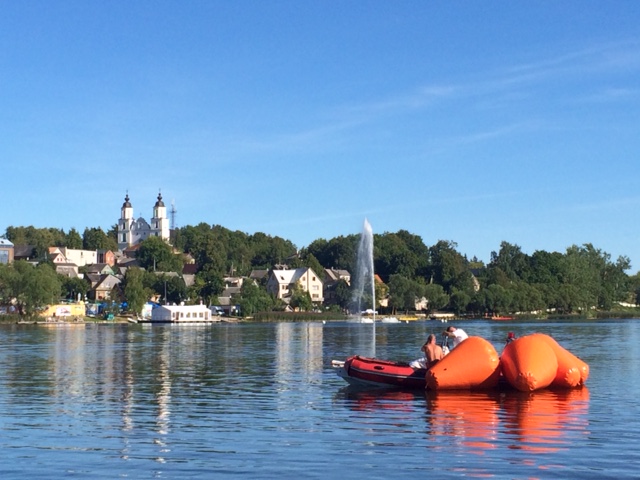 Lithuania’s inaugural F2 event lasted only 6 laps for home hero and organizer Edgaras Riabko as his unfortunate barrel roll during the Saturday Free Practice resulted a massive damage underneath his ASV hull. Driver with minor back injuries will have to give up further fights on the water for the rest of the weekend but he will surely have s lot to look after on land. Zarasai, at the northern borderline of Lithuania host this weekends F2 European Championship with heat racing of 4 rounds over two days. It was Pierre Lundin of Sweden who entered the circuit first – history will mark this – but anothet swede Erik Edin who clocked the fastest lap time of 00:41:75 secs followed by returning Latvian Uvis Skakteris on 09:41:82 and Lundin at 00:41:94 seconds. The field of 12 boats welcomes new drivers in the F2 Family with russian based NewStar Racing Team two drivers, Roman Vandyshev and Konstantin Ustinov.  Saturday program will furthermore include the Qualifying and Race 1 later in the afternoon.