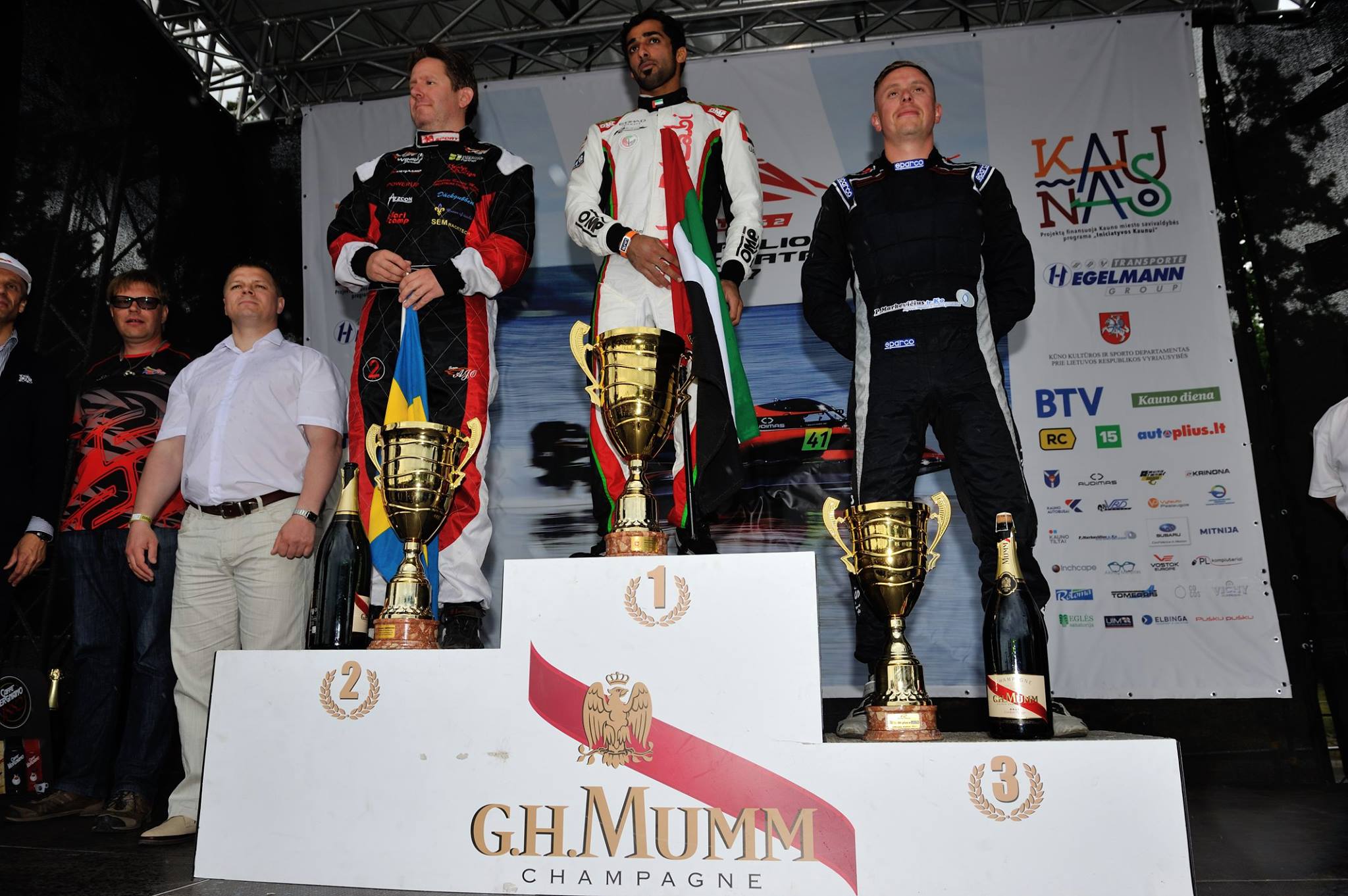 Over the past few years the opening rounds of the UIM F2 World Championships have provided the series with some unfamiliar names on the winners trophy; 2016 Alberto Comparato, 2014 Peter Morin, being just two of them. So no one should really be surprised that Team Abu Dhabi driver, Rashed Al Qemzi, has now joined that list of talented drivers getting their season off to a prefect start.

It certainly wasn’t a straight forward lights to chequered flag victory, although at no time was anyone ahead of the UAE driver. An even more remarkable feat bearing in mind he had to contend with three starts today, including a rolling re-start.

The Lithuanian F2 Grand Prix had hardly got going before the race officials were lining the competitors up again for a re-start. Tobias Munthe-Kaas, who had started from third on the grid, was forced to take action to avoid a driver who had crossed in front of him.

I had two options, one was to T-bone him, the second was to try and save the situation. I tried the latter and ended upside down.

At the second time of asking the field of nineteen drivers all made it safely round the first turn mark but it wasn’t long before the red flag was waved again brining everyone to a halt. This time the rescue teams were heading to the far side of the course to attend to a collision between David Del Pin and Matt Palfreyman. It transpired that Del Pin and Erik Edin had earlier collided and that the steering on Del Pin’s BaBa hull had been damaged. Powerless to steer his boat he collected the unfortunate British driver whose sponson was badly damaged in the impact.

Edin was on my outside when we turned the mark

Then the next thing is he’s almost on top of me, brakes the steering and I hit Palfreyman. I have to say that I’m a little angry because of the way Edin drove today. He’s was having a bad weekend but he made mine and Palfreyman’s worse.

The British driver was unhurt in the collision but his team are now heading back to the BaBa workshops in Italy, something they certainly hadn’t planned for.

After both boats and drivers were safely back ashore, the race officials decided that a safer alternative to another dock start would be a rolling one. Once again Al Qemzi led the field around the short, tight, course in front of several thousand Lithuanian fans all cheering on their local hero Edgaras Riabko, who was in second place. Up to third now was Johan Osterberg but the Swedish diver had his mirrors full of Nelson Morin who was making his F2 World Championship debut. Lap after lap Morin poured on the pressure, making good use of the back markers to close the gap.

My radio man was telling me that Morin was just two seconds behind me and closing. I was getting so frustrated with trying to find a way past the slower drivers that at one stage I almost turned into the Incredible Hulk.

Then a huge accident took place just in front of the race pits. Mohamed Al Mehairbi in the Team Abu Dhabi DAC hull had crashed into Finland’s Harri Lehti and as the spray began to settle there was no sign of Lehti. The rescue drivers managed to release the trapped driver and he was immediately evacuated to the near by hospital where he is receiving medical attention.

With the laps counting down under the yellow flag the race organisers were obliged to use the rule that increases the number of race laps by five to avoid the Grand Prix finishing under a yellow flag situation. This meant that once again Al Qemzi had to keep his wits about him to avoid losing the lead, especially as by now Riabko was right behind him. In fact the Lithuanian driver was slightly to close and as the green flag was raised Osterberg flew past him and into second place.

A simple error on my part cost me second place

By the time I saw Osterberg I knew it was too late to accelerate, next time I will know better. I can’t be too disappointed because a podium finish in my home town was something I had dreamt about but never expected.

Out in front was Al Qemzi who knew victory was his and to the obvious delight of his team he took the chequered flag.

That was a pressurised race

I had to drive one hundred per cent for the first fifteen laps to keep Riabko behind me. This is a new adventure for me but I know I have the right boat for this category, plus training after training will give me the good experience I need to get the job done.

His Team Manager Guido Cappellini was full of praise about his driver but knows the next event will be a huge test as the race teams now head to Antwerp, Belgium where Cappellini raced F1 back in the late 1990’s.

It’s incredible rough there but Al Qemzi will cope you can be sure of that.