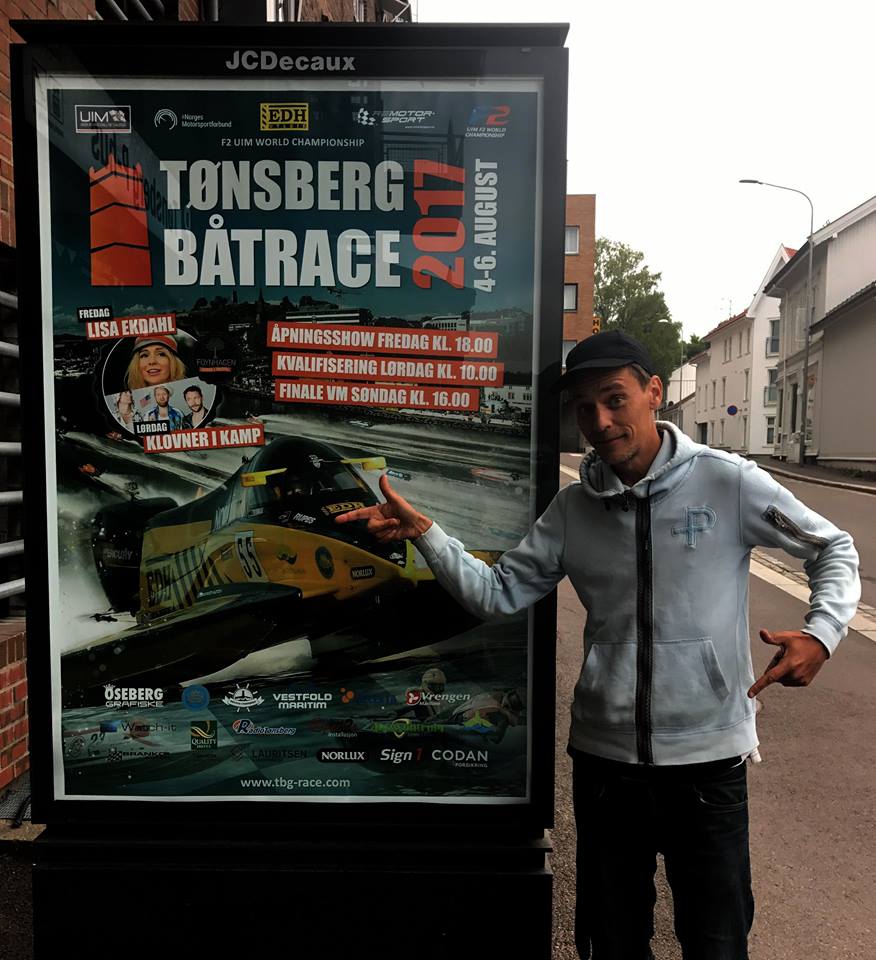 As you move around the municipality of Tønsberg, in the Vestfold county of Norway, it would be extremely hard not to notice that the third round of the UIM F2 World Championship is about to take place in its locality.

Of course this just doesn’t happen by chance

said Frode Sundsdal, the Project Manager of the Tønsberg Batrace

we have printed more than one thousand square metres of banners to promote not only the event and our sponsors, but also Tønsberg itself.

Although Sundsdal is a ‘man of many talents’, he leaves the more artistic side of promoting the event to Tony Blom-Pettersen.

You can see Tony’s finger prints are all over Tønsberg

When we ran the International Ordinary race back in 2014 I needed help promoting the event, so I approached a local advertising agency and that’s where I met Tony.

The following year the event became a round of the UIM F2 World Championship and Blom-Pettersen joined Sundsdal’s team on a permanent basis as the Creative Manager. That meant that he would also become responsible for creating the EDH Racing Team’s branding, along with everything connected to the Tønsberg Boat Show, as well as the Grand Prix itself.

Sundsdal soon realised that Blom-Petterson was not just an ‘artists’ but also a ‘media guru’ with over fifteen years of experience in the advertising industry. So they set about in giving their event sponsors some added value by offering them Blom-Petterson’s services in promoting their own brand. As an example this has led to Blom-Petterson producing brochures for Branko Auto, the local Subaru and Land Rover dealership, who are also one of the key sponsors of the Grand Prix.

so you have to come up with something different. If that means getting involved with one of our sponsors companies from the ground upwards so that we know what they like and what works for both of us then so be it because we both benefit.

For the F2 Grand Prix weekend Blom-Petterson’s role is slightly different because he is heading up the social media distribution hub.

We are going to have an eight camera production team for web TV streaming. This will be available throughout the race weekend. We are planning to have driver interviews from the race pits with Marit Stromoy and Silvia Borgonovi asking the questions. We start on Friday evening with live coverage of the Speed Runs and Match Race. Then, for the actual race on Sunday we will have Morten Bjerknæs alongside John Moore, although we might need John’s microphone on a five second delay

You will be able to find all of the Live Web TV streaming times via the tønsberg båtrace 2017 FaceBook page and the local newspapers.