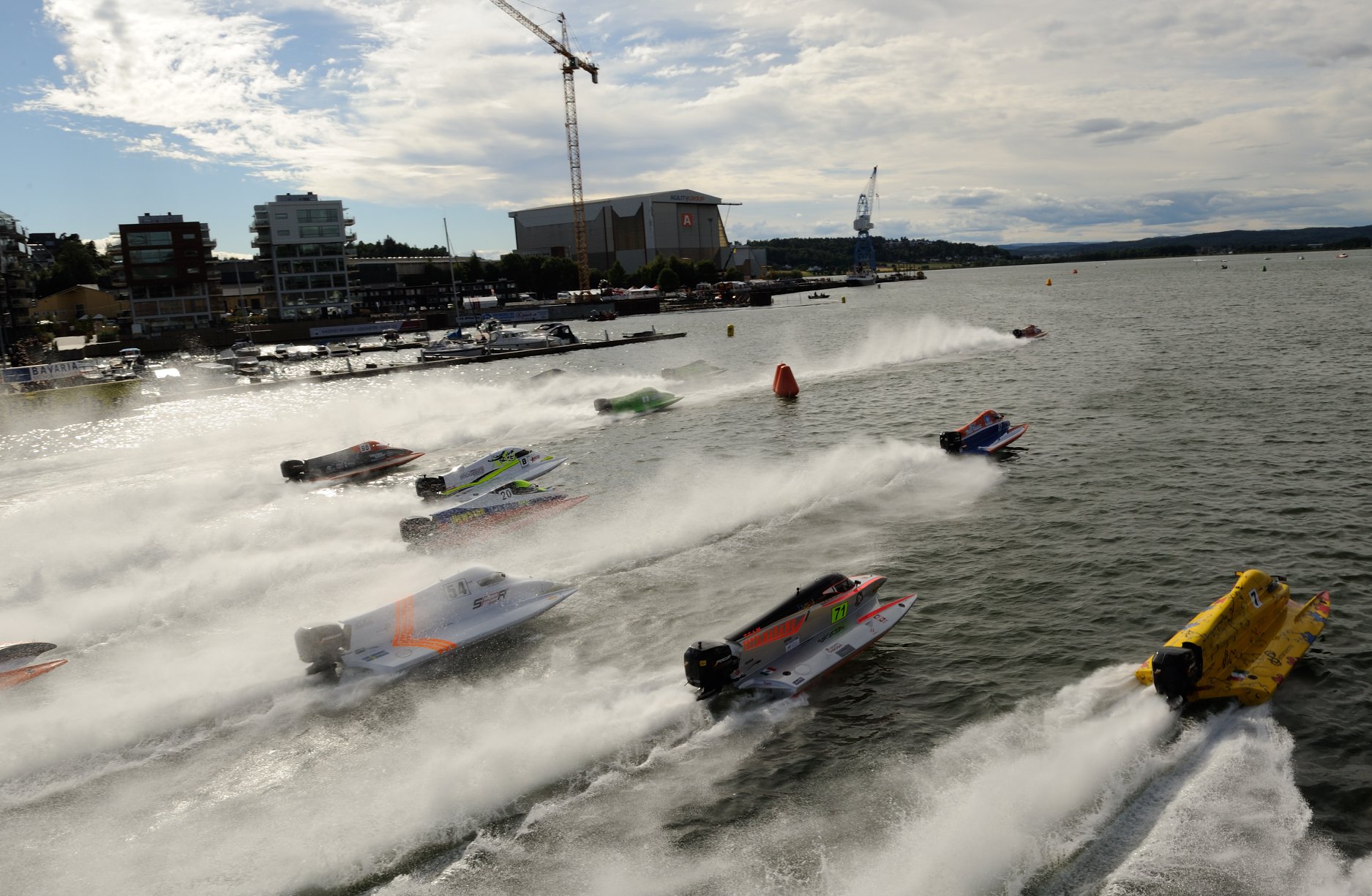 When the biggest ever variety of Nations gathers in Tønsberg, Norway for Round Three of the UIM F2 Powerboat World Championship, the question on most people’s lips will be who do they think will occupy the top step of podium come Sunday night?

After the dramatic change in the weather conditions on Sunday in Aalborg, which left the Race Officials with little option other than to cancel the second round of the World Championship, the competitors now arrive in Norway with a sense of ‘déjà vu’ as far as the title hunt is concerned.

So can the current Championship leader, Alberto Comparato maintain his race winning form or will he approach the event in a tactical way. The young Italian driver said:

If I’m honest Tønsberg is still too early to think about the Championship. At the first round in Kaunas I didn’t feel any pressure. I wasn’t expected to win, so I think to have a good race in Tønsberg I need to arrive with the same mind set and just see what happens. Yes, the race circuit is totally different but it’s the same for those that stood next to me on the podium back in Lithuania.

Finishing in that runner-up position behind Comparato back in May was the local hero Edgaras Riabko who, by his own admission hasn’t had the easiest of times in Norway:

On a person level Tønsberg is not my favourite course. In 2015 I had engine problems and didn’t finish. Then in 2016 I was thirteenth, I couldn’t see anything through my windscreen, it was like racing by remote control. Then last year I finished in tenth place, but that was only via the repechage. I want to thank Frode for doing an excellent job as I totally understand how hard it is to race and to be the organiser. I wish him fresh brains and to be ready to fight with me, because I won’t let him win this race.

Another driver that has left Tønsberg with a sense of ‘what if’ also occupied the Kaunas podium at the opening round and he’s Germany’s Stefan Hagin. Back in 2015 the Molgaard driver set a brilliant time to qualify in pole position only to finish a lowly fifteenth place in the Grand Prix.

In fact starting in pole position has never been a guarantee of success, only Erik Edin has scored points from starting in the number one spot and a driver that knows that so well is Tobias Munthe-Kaas:

Sure getting pole position at your home Grand Prix is really special. In fact last years pole position in Tønsberg was a turning point for me because we had actually used up our race budget and were about to cancel the rest of the season.

Fortunately for him his pole position convinced his sponsors to find the extra funds he needed, plus it also attracted some new one. The the Norwegian driver said:

They have all signed up for the 2018 season and we are now stronger than before to continue our progress. We have shown top results through this season and are ready for that pole again in Tønsberg as well as the top step of that podium come race day.

Another Norwegian with his eye on the prize is Frode Sundsdal whose recent successes have included the German F2 Championship along with the Scandinavian F2 title. This has come as a mixed blessing though as he now finds himself under huge pressure to deliver at ‘his’ event.

said Sundsdal who has been working tirelessly over the past few months to make improvements both on and off the water.

Due to the number of entries we have received we had to amend the race course to allow us to run eighteen boats. So we have added a slight bend past the ‘guest harbour’ to accommodate that number.

If you told me five years ago, when we ran an International Ordinary event here, that we would attract thirty entries with the likes of Team Abu Dhabi and the Dubai Victory Team, along with drivers flying in from Australia and the USA then I would have said you were crazier than me.

With the‘Tønsberg Tamer’ Pierre Lundin now over seeing the racing development of Brent Dillard one thing is certain and that is by Sunday evening there will be a new name on the winners trophy.