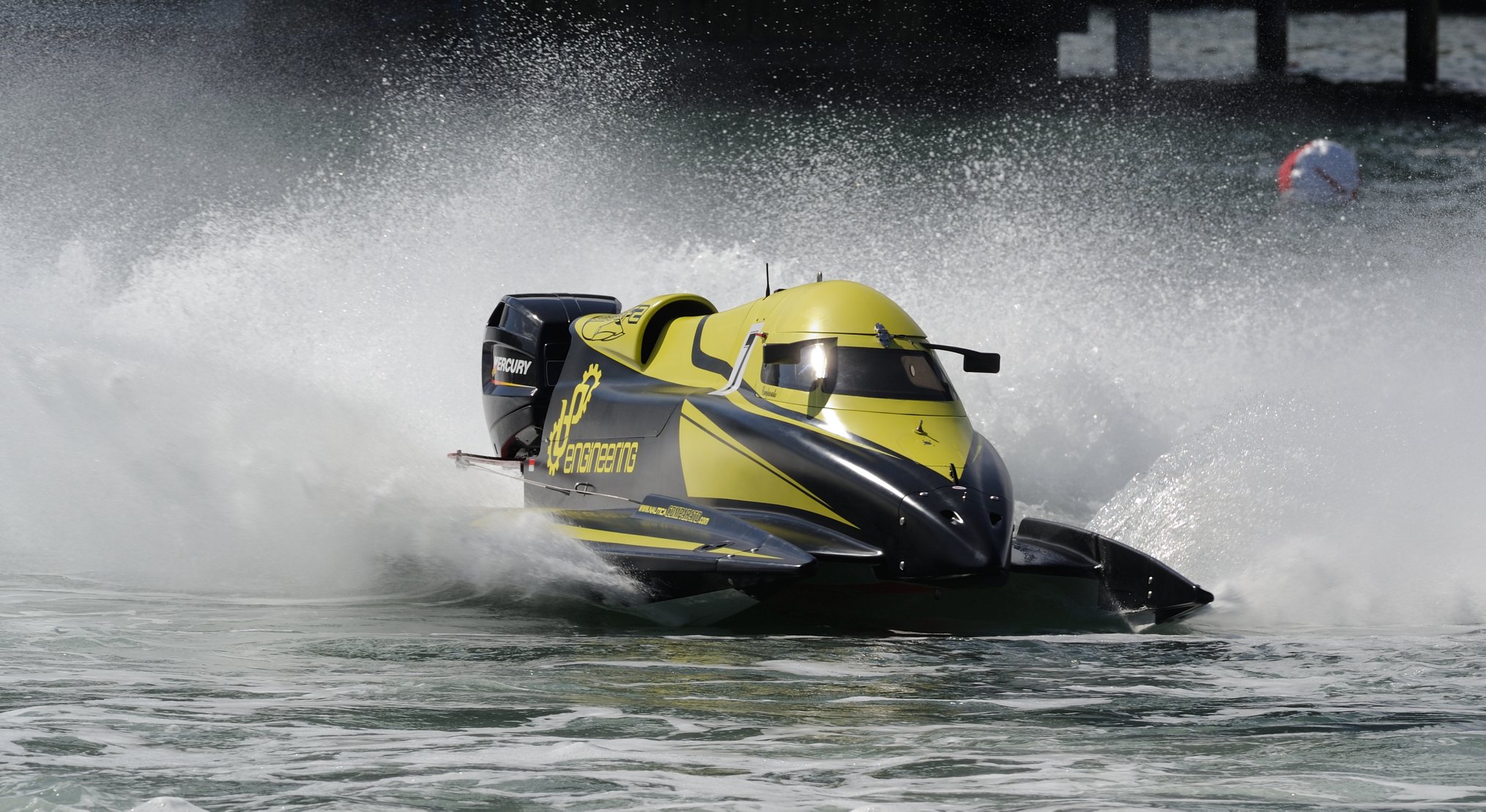 Today’s qualifying for the EDH Grand Prix of Norway, round three of the UIM F2 Powerboat World Championship left us with a rather familiar look about it when the top three positions went to the drivers who occupied the winner’s podium back in Lithuania.

The Norlux sponsored qualifying session was split into three sessions with nine boats in each, although Q1 was also split into three 20-minute heats because of the size of the field and the fact that a maximum of 18 boats will start Sunday’s Grand Prix on the recently revised race course.

Changeable weather conditions prevailed at the start of the session, where Oskar Samuelsson suffered technical problems and needed to be towed back to the pits. Stefan Hagin was soon setting the target to beat when he posted a 41.63sec lap. He was promptly joined at the top of the timing screens by Rashed Al-Qemzi with a run of 41.75sec. The duo was eventually joined in Q2 by Tobias Munthe-Kaas, Frode Sundsdal and Ferdinand Zandbergen with Samuelsson, Mansoor Al-Mansoori, Mette Bjerknaes (broken gearcase) and Owen Jelf being eliminated.

After a slight delay due to the heavy rain and a strengthening wind, Team New Star’s Konstantin Ustinov set the early target with a 42.53sec run but that was surpassed by Daniel Segenmark’s lap of 42.34sec. Rashed Al-Tayer moved into fourth place with 43.19sec. By now the conditions were getting calmer and Ustinov regained the lead with a 41.97. With barely any time left Segenmark won the heat with a 41.84sec lap. Alex Carella just missed out due to an overheating compressor.

It wasn’t the goal of the day

one day good another day bad but that’s racing.

Gavin Bricker, Rupert Temper and Kalle Viippo were also eliminated. Ustinov and Segenmark were joined by Edgaras Riabko, Al-Tayer and Spaniard Héctor Sanz all safely through to Q2.

Christian Carlsen and Bimba Sjöholm made it through the third of the Q1 heats with a joint winning time of 42.19sec. The Norwegian and the Swede were joined in Q2 by Alberto Comparato, Johan Österberg and Ola Pettersson. Rookie Lars Erik Andresen, Nick Bisterfeld and Sebastien Haugaard were eliminated as the session finished in darkening conditions and the onset of a storm. Österberg’s late lap of 42.44sec had also pushed Brent Dillard out of the running and into the Repecharge race on Sunday.

This event is one hundred per cent communication and if you lose that then you are heading for failure or in our case the ‘B Final last chance salon.

Following a short break, Q2 ran for 15 minutes and the fastest ten were then given a single run in a Q3 shoot-out to determine pole position. Ustinov hit the front with a 42.97sec run and that was the target through the first five minutes. Hagin moved to the front in 42.46sec but Al-Qemzi recorded a flying lap of 41.63sec to win the session. Sjöholm, Segenmark, Pettersson, Sanz and Österberg missed out on Q2.
Comparato was the first of the ten Q3 qualifiers on to the water for the two-lap shoot-out and the Italian posted a stunning target of 40.00sec. Sundsdal clocked a 41.03sec and Zandbergen ran a 41.22sec before Al-Tayer opened with a run of 41.56sec and improved with a 41.25sec. Ustinov was next on to the water and the Russian clocked a best run of 40.59sec to move into second position.

Carlsen then moved into a provisional fourth with a 41.16sec lap, but Hagin spun on his opening lap and setting a time of 40.50sec to claim second place behind Comparato and then improved with a 40.35 second attempt,

That cost me any chance I might have had to take pole.

Riabko edged into third with a 40.46 and was both surprised and delighted with that effort.

In the end I just picked one I trusted, and it got the job done.

A best time of 40.72sec for last year’s pole winner Munthe-Kaas left the door open for Al-Qemzi to try and claim pole position for Team Abu Dhabi. The defending champion opened with a run of 41.91sec and improved with a 41.00sec tour to qualify in sixth place and that confirmed pole position for a delighted Comparato.

The only challenge was to get into Q3. Once I was there I knew exactly which prop to run and how to use it for maximum effect.

Following post qualifying scrutineering the engine being used by Christian Carlsen was found to be not standard according to the UIM Technical Commissioner and the Norwegian driver will now start from the back of the grid in tomorrow’s Repecharge which starts at 13:30 local time. This means that four grid places will now be up for grabs for the EDH Grand Prix of Norway that follows later at 16:30.