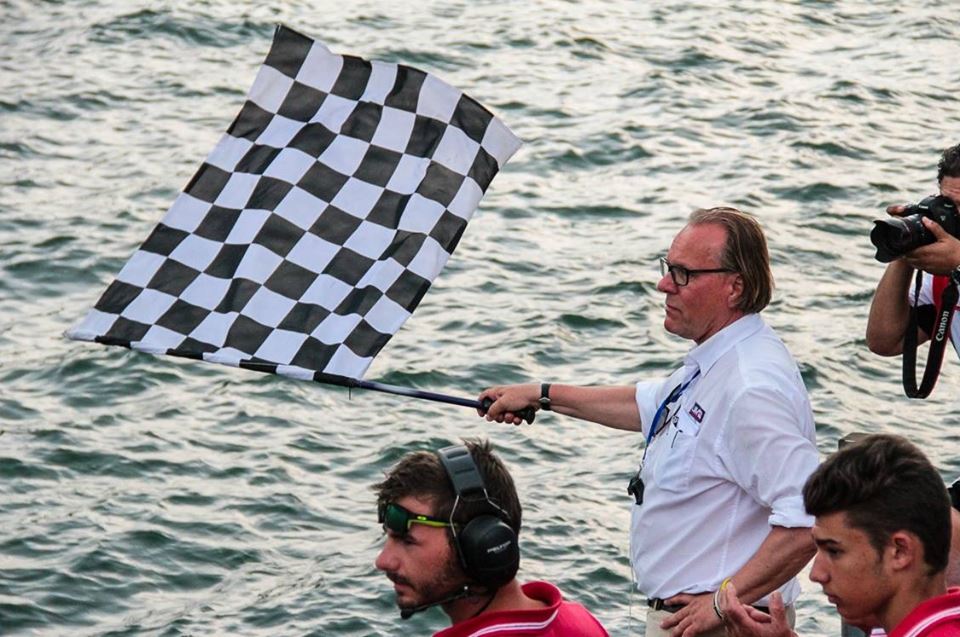 Earlier on this year it was decided by Thomas Kurth, Secretary General of the UIM that the UIM F2 World Championship needed something of a ‘make-over’ if it was to not only survive in this tough economic climate but also remain relevant in today’s sporting environment. So, with just over a week till the start of the 2019 UIM F2 World Championship it was time to sit down with Pelle Larsson, who had been appointed by UIM Events s.a.r.l., a newly created commercial branch of the international governing body and talk about his role of UIM F2 World Championship Race Director.

Can we start by asking what does this new role involve and how does it differ from the UIM Sports Commissioner that you were in previous years?

The biggest difference so far being ‘Race Director’ is that I have become more involved with the race organisers and as this role progresses, I can see me providing more input into how we run an F2 Grand Prix. This isn’t a new idea as both F1H2O and the XCAT series have a similar position. We will still have a UIM Sports Commissioner acting as an observer, that role will be carried out at every round by Giacomo Borgonovi. The two of us along with the UIM Technical Commissioners will follow the regulations that exist for F2 in the UIM rule book.

So, can we expect any new changes for the 2019 UIM F2 World Championship?

I really can’t see any major changes this year. We have a superb race calendar with five World Championship rounds culminating with a ‘Grand Finale’ in early December in Abu Dhabi. Add the UIM F2 European Championship into the mix and competitors could now enter six UIM F2 races. Because of the increase in competitor numbers we will get a new UIM Technical Commissioner Szymon Nowak from Poland and together with Luca Basilico they will be present at each race site. We are also working on having a trainee to support our UIM Technical team.

Who do you see as being the top contenders for the World Championship and why?

As usual, it’s always very difficult to make predictions. What I understand is that Brent Dillard is investing heavily. Having input this year from Alberto Comparato rather than Pierre Lundin is an interesting strategy, will that help him to the top let’s wait and see. Soon it must be time for Tobias Munthe Kaas to blossom. He has previously been quick in qualifying, so now it’s time to take that next step to keep that pace in the race as well. We also can’t forget Rupp Temper who is like a fine wine and gets better and better with age. Without doubt Team Abu Dhabi will be involved in the game. As for their neighbor the Victory Team 2018 was not a great season by their own high standards so I can imagine that they are craving revenge.

As a former circuit racer, do you think we should do anything different to attract and retain more racers and has it got any easier or harder to compete at this level than when you raced?

At the time when I was driving OE-ON-OZ, it was incredible, we had many drivers in all countries that ran the big classes. From memory it felt that everyone started racing when they were a little older, most of them had made their careers, had families and had money in their bank account. True, it was also a little easier with sponsors back then. Those who are racing F2 today, I really admire them, they work hard and struggle to be able to compete. They have the big problem of finding sponsors to compete at this high level. A few of them have young families and usually a good job that takes a lot of time. It is also not so easy for everyone to bring team members to the races. Today you need at least three crew in addition to drivers in a team if its going to function in the best way.

To help maintain this excellent class for me there are at least two important issues that must be resolved in the best way. The first being is that we must have a race calendar one year in advance so that we can all plan for it. So, key to this is to have local promoters who have at least a three-year contract with UIM Events. That way drivers and teams can plan their racing season in the best way and then it will also be interesting for sponsors to be included.

The second area we need to look at is live streaming and I know that more local promoters are working on that issue. We also need to look at ways of improving our media platform, make the F2 website a hub for delivering information. Face Book, Twitter and Instagram are all important, but our own website should be the first port of call for following the championship. If we can deliver in the best possible way to these two points, we have won a lot, this is where we have to start building.

You mentioned earlier that you are involved with the current local race promoters, can you tell us more about that?

I have had a diligent dialogue with Edgaras Riabko, where we at UIM Events have been helpful to that race. I have a good dialogue with other local promoters as well. I have been contacting both “old” organisers and “new” organisers for the future. I have also spoken with some of the F2 drivers. Earlier this year I was down in Brodenbach, Germany and met a few of them there. I have always felt that I have a good working relationship with F2 drivers, which will be key to the future success of the class.

Finally, where would you like to see the UIM F2 World Championship in five years’ time?

I will try to make a presentation for the drivers and teams now in Kaunas, with my thoughts for the future. I have had several meetings with potential sponsors, which is most important for our survival. As I have already mentioned there are some key points that are more important than others, the calendar and the live streaming being top of the list. I also think it’s time we took a closer look at how we run the World Championship. To begin with the UIM needs to develop a stronger, more defined ladder of progression from our youth classes through Formula Four, F2 and finally into F1H2O. For this to succeed then perhaps F2 needs a ‘European Feeder Series’ maybe split into Southern and Northern ones. From these series drivers can qualify to race in the UIM F2 World Championship, maybe by a ranking system. To travel to an F2 World Championship round and never qualify for the Grand Prix is not the way to go. There are many ideas that we must work together on. The UIM F2 World Championship is a good series, everyone has done a great job to get it to grow. Now we must all try hard to take it to the next level, which I believe is extremely achievable with the talent we have.