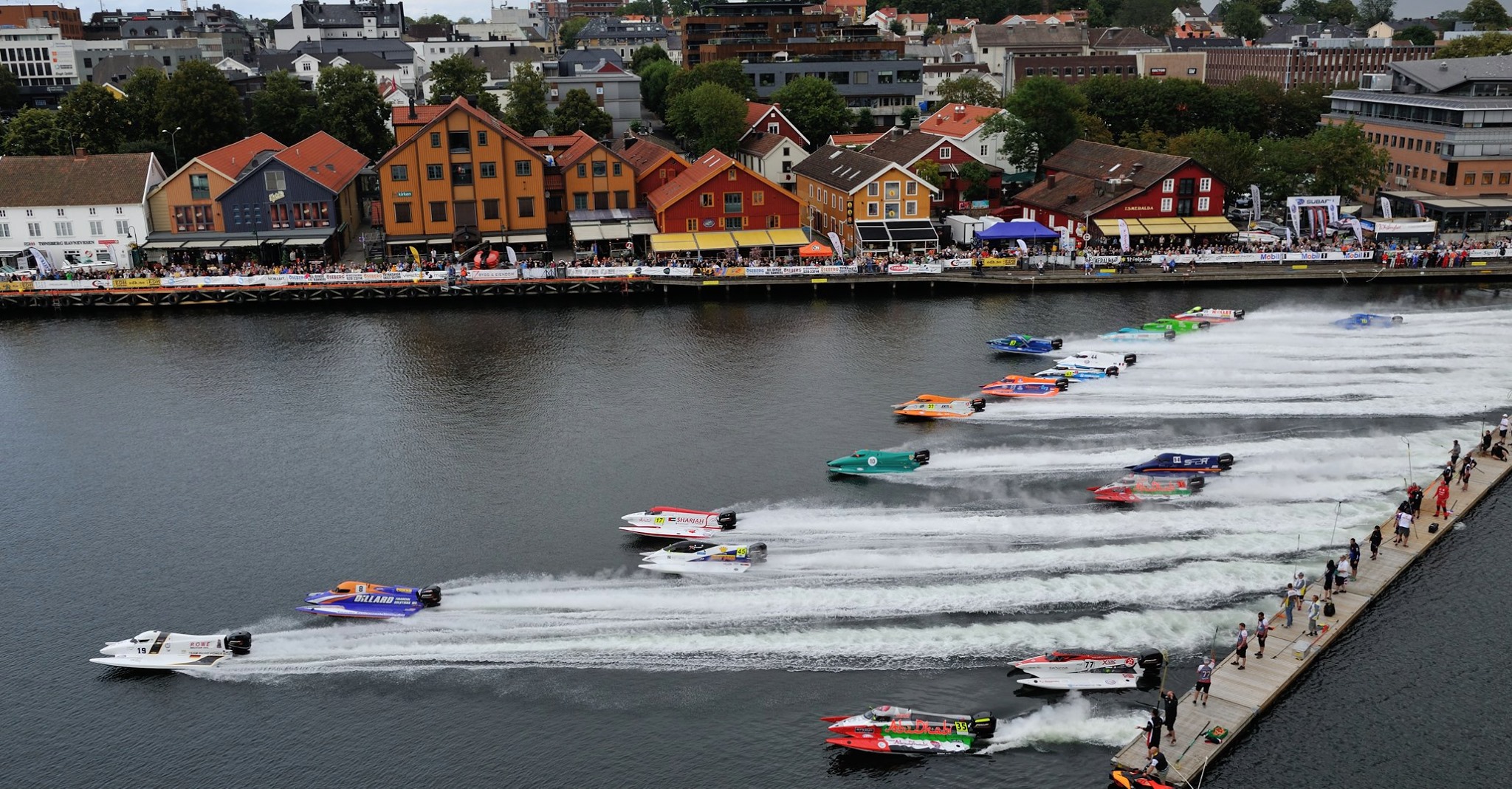 Stefan Hagin took his maiden UIM F2 World Championship victory today when he held off the hard charging Rashed Al Qemzi at the Grand Prix of Norway. The German racer, who made his F2 debut at the 2011 Hungarian Grand Prix sped away from the pontoon in Tonsberg leaving many of his rivals languishing on the start line, amongst them were pole sitter Al Qemzi and the local hero Tobias Munthe-Kaas.

Finally, we have done it

It’s been so hard through the years when you score no points in a season, sometimes a small problem has totally ruined my race weekend but today feels perfect.

When he was asked about his prefect start, he just put that down to having a fast reaction time.

At first, I couldn’t see Al Qemzi in my mirrors, so I thought he most be so close that he’s in the blind spot. Then at the right hand turn I realized he wasn’t there and began to relax a little.

For Al Qemzi it was almost a tale of what could have been when it took the Emirati two attempts to start his Optimax engine.

I just pressed the starter and watched everybody race away from me, it was just like being back in Kaunas.

From that moment on the Team Abu Dhabi racer was set to play a waiting game.

My race strategy changed, and I was told not to take any risks because we have the championship to think of. I tried to catch him each time by the marina, but the straights are too short here to overtake or put pressure on Hagin.

One driver who certainly was feeling the pressure was Munthe-Kaas. The Norwegian was pushing hard to make up for his poor start and over did it in turn five when he spun and lost the rear cowling from his BaBa hull. His day wouldn’t get any better as later on in the race he missed the pin turn and tried to re-take it; unfairly in the eyes of the UIM Officials who would later disqualify him from the Grand Prix. Daniel Segenmark, who had been challenging for a podium spot would also receive a DQ for exactly the same reason.

Having a weekend to forget was the American driver Brent Dillard. After his clash with Johan Osterberg during Saturday mornings Free Practice session, Dillard went onto qualify in fourth place for the race. Taking full advantage of those left behind at the start, he was quickly challenging for the lead until he was caught and passed by Al Qemzi for second place. Heading back to the pin turn where he had survived his earlier drama, he caught the wash coming back from the dock wall and over he went much to his frustration.

Match Race winner Bimba Sjoholm would be another to suffer a bout of frustration after she was struck from behind by Philippe Tourre in the opening laps of the Grand Prix. The Swedish driver managed to continue until half distance before she barrel rolled out of contention at turn five.

With the race finally settling down it looked like Hagin would be followed home by the two Team Abu Dhabi boats. Unbeknown to them, Rashed Al Tayer had been judged to have not maintained his lane on the opening lap and would incur a one lap penalty which would drop him back to fifth place. That would promote Duarte Benavente to third overall much to the obvious delight of the Portuguese driver.

I love it here, my team have done a superb job all weekend and this is the best reward. For me it’s special because my Mum passed away exactly five months ago, so this is a big kiss to her.

The next event on the UIM F2 World Championship calendar is a welcome return to Southern Italy for the Adriatic Cup taking place in Brindisi at the end of August.