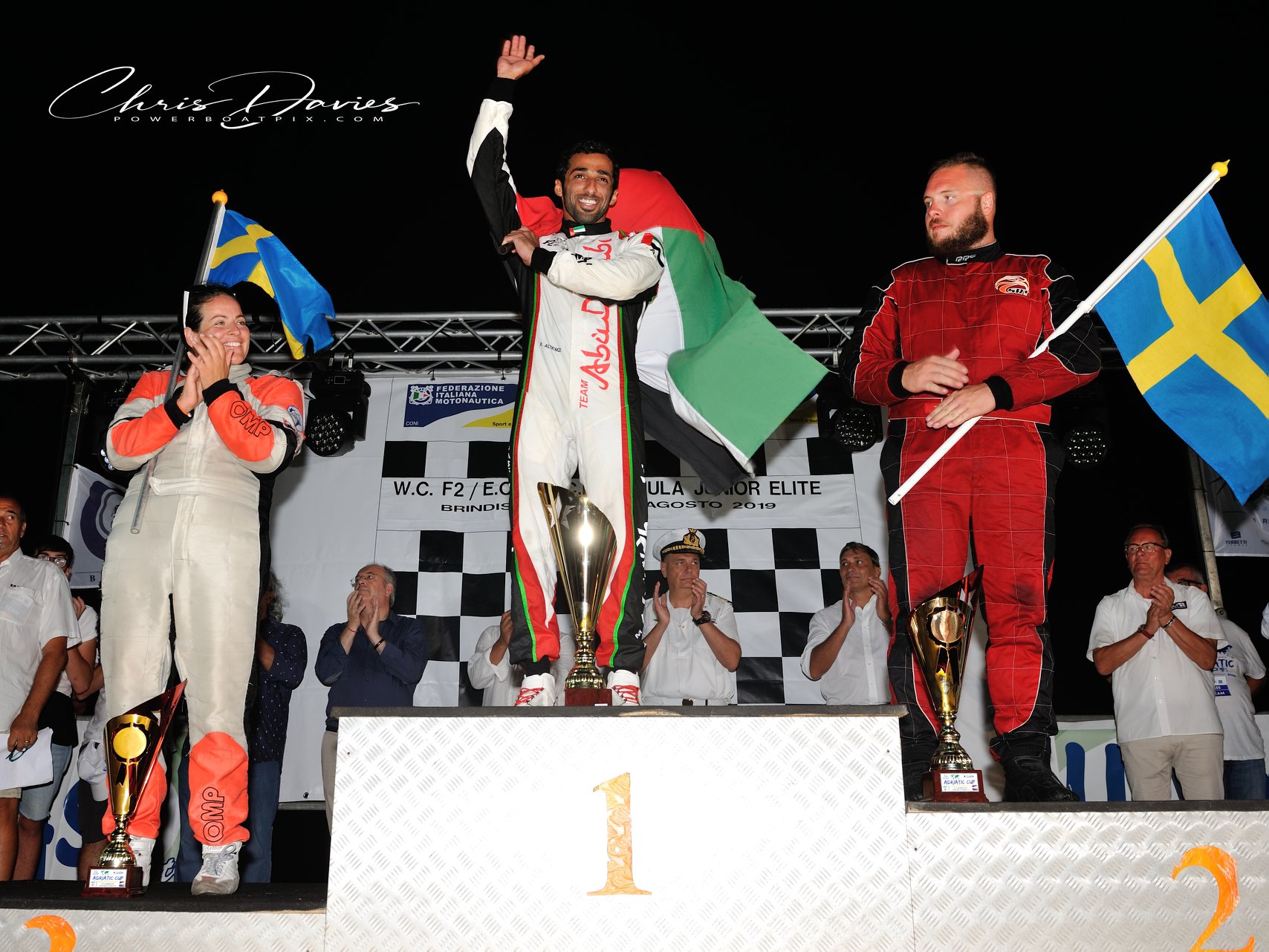 When it was announced that the city of Brindisi on the Adriatic coast of Southern Italy would host Round Three of the UIM F2 World Championship memories of previous races came flooding back. Thoughts included Ola Pettersson taking an emotional maiden victory, the Stark v Lundin battle, Matt Palfreyman’s podium place on his UIM F2 debut, so the expectation of another excellent weekend in the sun were high.

The weekend though didn’t really get off to the best of starts when the drivers quickly discovered that the welcome party had been moved from a convenient quay side venue to a location some ten kilometres away. As the majority of teams had no suitable transport several were unable to attend and those that did soon realised that the food wouldn’t be served for quite a while.

As Saturday dawned so did the realisation that two key elements were not in place, the first being a start pontoon, the second one being no course laid out; it was going to be a very long day. The local organisers were quick to point out that the last event they had hosted was an aqua-bike one where the National Authority had provided the necessary infrastructure. Perhaps they had thought things had changed since we were last there back in 2015. Either way it meant that the already congested timetable would need heavy modifications, especially as the first Free Practice session was now starting nearly four hours later than planned.

With both F2 Free Practice sessions completed the teams now had a chance to cool down as those competing in the UIM F4 European Championship were now out on the water. Once that was completed the first batch of F2 racers were back out for Q1 Group A, but as the evening sun light was rapidly turning into a beautiful sunset any chance of completing the F2 Qualifying sessions had diminished, so pole position would be determined on Sunday morning.

Following Sunday morning Drivers Briefing the final pieces of the qualifying jigsaw puzzle were about to be put into place. Already out by this point and facing the repêchage were Mette Bjerknaes, Johan Osterberg, Mansoor Al Mansoori, the Italian Champion Paolo Longhi, Luca Fornasarig and Giacomo Sacchi, who was making his UIM F2 debut. Rupp Temper had decided to withdraw following the decision of the Race Director to remove his fastest qualifying lap time for a track infringement. Temper was one of seven drivers to lose their fastest lap time.

The remaining fifteen racers were now out on the water for Q2 followed by the top ten shoot-out and it would be Rashed Al Qemzi, who had been extremely quick all weekend, that posted the fastest time, the only sub thirty-five second one at that. Up till then it had been Bimba Sjoholm who had held pole position, underlining her brilliant performance in the Tonsberg Batrace Match Race at the previous round but she now made way for the championship points leader. Then it would be Tobias Munthe-Kaas who would be lining up along side her and next to him would be the Tonsberg winner Stefan Hagin, with the Sharjah Team driver Ferdinand Zandbergen in the fifth spot.

As the minutes ticked down the six racers lined up to compete for those last remaining five spots on the start grid with Bjerknaes on pole. As quickly as they started though it was soon all over as Al Mansoori had taken out three turn buoys, in one lap he won’t want to remember in a hurry leading to instant disqualification and the chequered flag. To the relive of the organisers they had suddenly gained back the lost time and a 17:30 start was beginning to look realistic.

A lunch time drivers briefing was quickly arranged with one point up for discussion. With no suitable start pontoon available for twenty boats it had been decided that the only solution was a rolling start. This was sweet music to the ears of both Al Qemzi and Munthe-Kaas who had both suffered in the Optimax engine ‘Wheel of Fortune’ at the previous rounds.
So, in the evening twilight twenty drivers began lapping the circuit line astern waiting for the green flag to signal the off. It wasn’t long before they were released and as they all headed towards the pit turn several of the drivers had what can only be described as an agricultural awakening, when they hit the waves bouncing back from the harbour walls. With the first of forty-three laps safely negotiated Al Qemzi began to stretch his legs leaving Sjoholm trailing in his wake. Moving up through the field like a man possessed was Ola Pettersson, who was obviously still feeling the Brindisi love. It wouldn’t be long before he past Sjoholm to take second place but at that crucial moment out came the yellow flag to allow the tow boats to remove a stricken Sacchi from the course, along with replacing a yellow turn buoy which had partially deflated. It meant that Pettersson had to drop back behind his fellow Swede.

For the second time of asking those drivers left were put through yet another rolling start for what was by then a ten-lap sprint race. Once again Al Qemzi took off like a rocket, so much so that his radio man and team were telling him to slow down for fear of him wrecking his victory chances. They needn’t have worried because Sjoholm had given up any chance of catching the Abu Dhabi driver as her attention had switched to Pettersson filling her mirrors. As Al Qemzi took the chequered flag all eyes were on the battle for second and as the pair rounded the pit turn Pettersson made a last ditched attempt to pass Sjoholm which to the amazement of the vast crowds watching from every possible vantage point, proved successful.

It was an awesome race and now I know what this boat can really do. It was almost like racing back in the T400 days having to battle with Ola Pettersson for second place. When he got me in the very last lap, I thought ok third place is fine because all I wanted was to bring the boat back dry and earn some points for the World Championship but the next race, I will be tougher to pass.

For Pettersson it was one of the roughest races of his life.

Rough and tough, it was like an offshore course out there. The feeling I have right now was just like the time I won here; this place is magical but sweaty at the same time.

Moving up from ninth to secure second place wasn’t enough for ‘Drive of the Day’ though because that went to a ‘super happy’ Bjerknaes who had won the repêchage and started from a lowly sixteenth place to finished eighth place, collecting some much-needed points for the Race to Abu Dhabi.

After the yellow flag my adrenalin was flowing as the pressure was back on me, especially as this was a very short circuit, but I regained the lead and felt comfortable after that and just focused on staying ahead.

Such was his dominate performance that by the chequered flag the Team Abu Dhabi racer had lapped everyone up to fourth place and now heads to Portugal with a staggering thirty points advantage over Zandbergen.

Can the Team Abu Dhabi driver complete the task of winning his second UIM F2 World Championship title in the Ribadouro venue where Champions are crowned, in just three weeks’ time we will know.