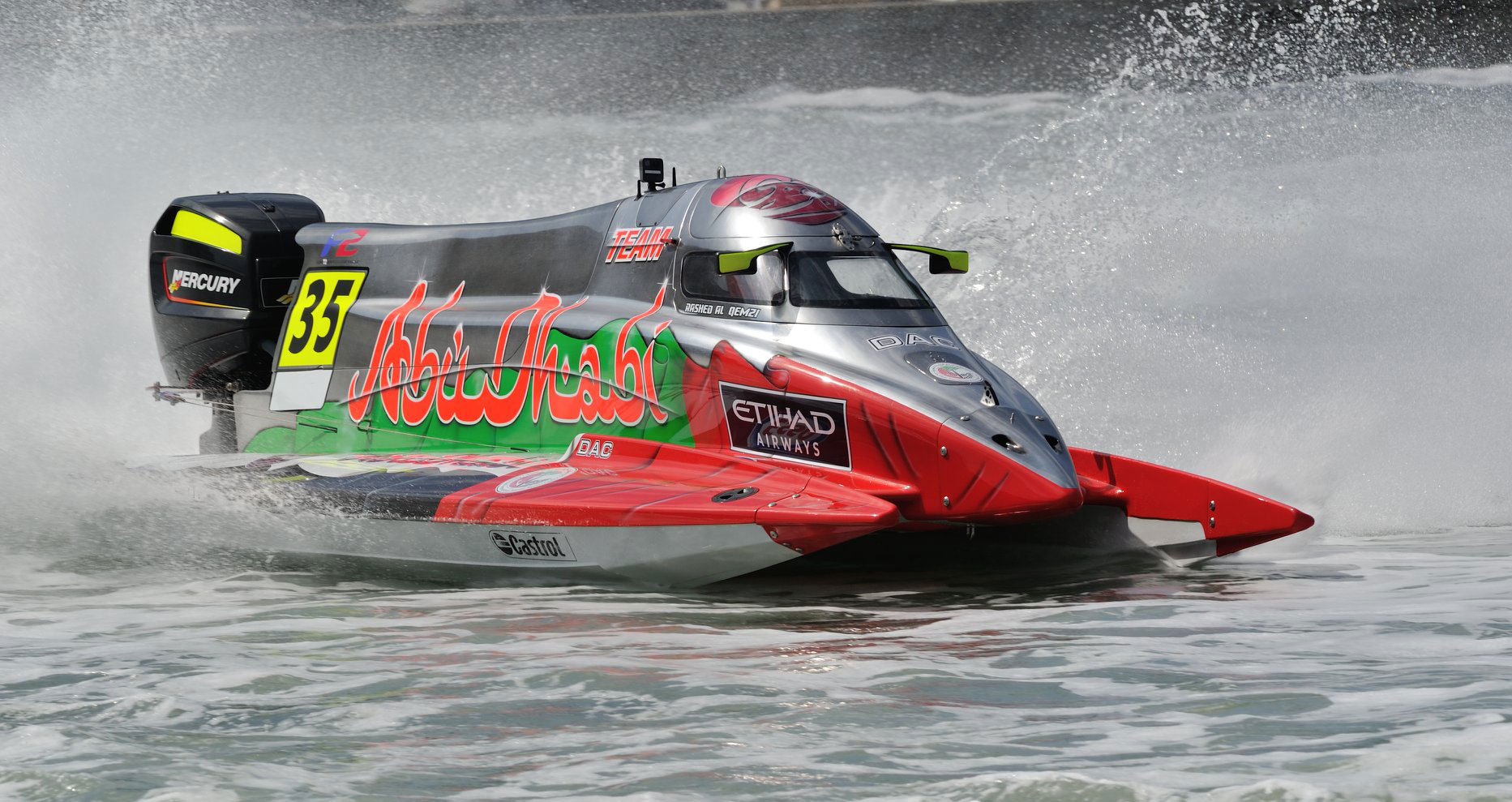 Team Abu Dhabi’s Rashed Al Qemzi, aiming to extend his lead in the UIM F2 World Championship, will start tomorrow’s Grand Prix of Norway in pole position as he pursues a second successive race victory. In a carbon copy of the grid for the opening round in Kaunas, Lithuania, Al Qemzi set the joint fastest time in the top ten ‘Shootout’ along with Norway’s Tobias Munthe-Kaas. Both drivers recorded an identical fastest lap of 37.97 secs, but the Emirati was credited with his second pole position of the season by virtue of a faster second-best lap time.

This morning we did many practices starts ready for tomorrow because this course is very tight and who ever starts first will stay first.

When Munthe-Kaas, who set the quickest qualifying lap time back at the 2017 Grand Prix, was told that Al Qemzi would start from pole he was fairly philosophical,

Ok, that’s the way it is. I pushed hard because I really wanted it, but everything is so close at this level. The secret to this course is that you need to get turn one right otherwise you screw up the whole lap, which is what happened to me on my first-time round. So, let’s see how he does at the start because I just need to see him in my mirrors.

Lining up alongside the Norwegian is another former pole position man Stefan Hagin who admitted that he made a mistake with his propeller selection for the ‘Shoot-Out’.

I had a problem it was too small. I gave it my best shot, but it was all what I could do to keep up with them. I’m not too concerned because I started from third on the grid in Kaunas and hit the front there, so, let’s just see what happens.

Taking the fourth spot on the grid will be the American Brent Dillard, which is quite remarkable bearing in mind only a few hours earlier he had a tremendous crash with Johan Osterberg in the first ‘Free Practice’ session. The Swede was on the racing line going into the pin turn and had seen that Dillard had moved over but as Osterberg was approaching the turn Dillard suddenly changed his mind and the pair collided sending the American skywards.

I was just settling into the DAC then the next thing I see is just the sky. He was really mad at me; I just hope that one day he can forgive.

Sunday lunch in the Tonsberg harbour restaurants will be served up to the background noise of those drivers warming up for the ‘Last Chance Saloon’. That will be followed at 16:30 by the UIM F2 Grand Prix of Norway followed by the podium celebrations an hour later.