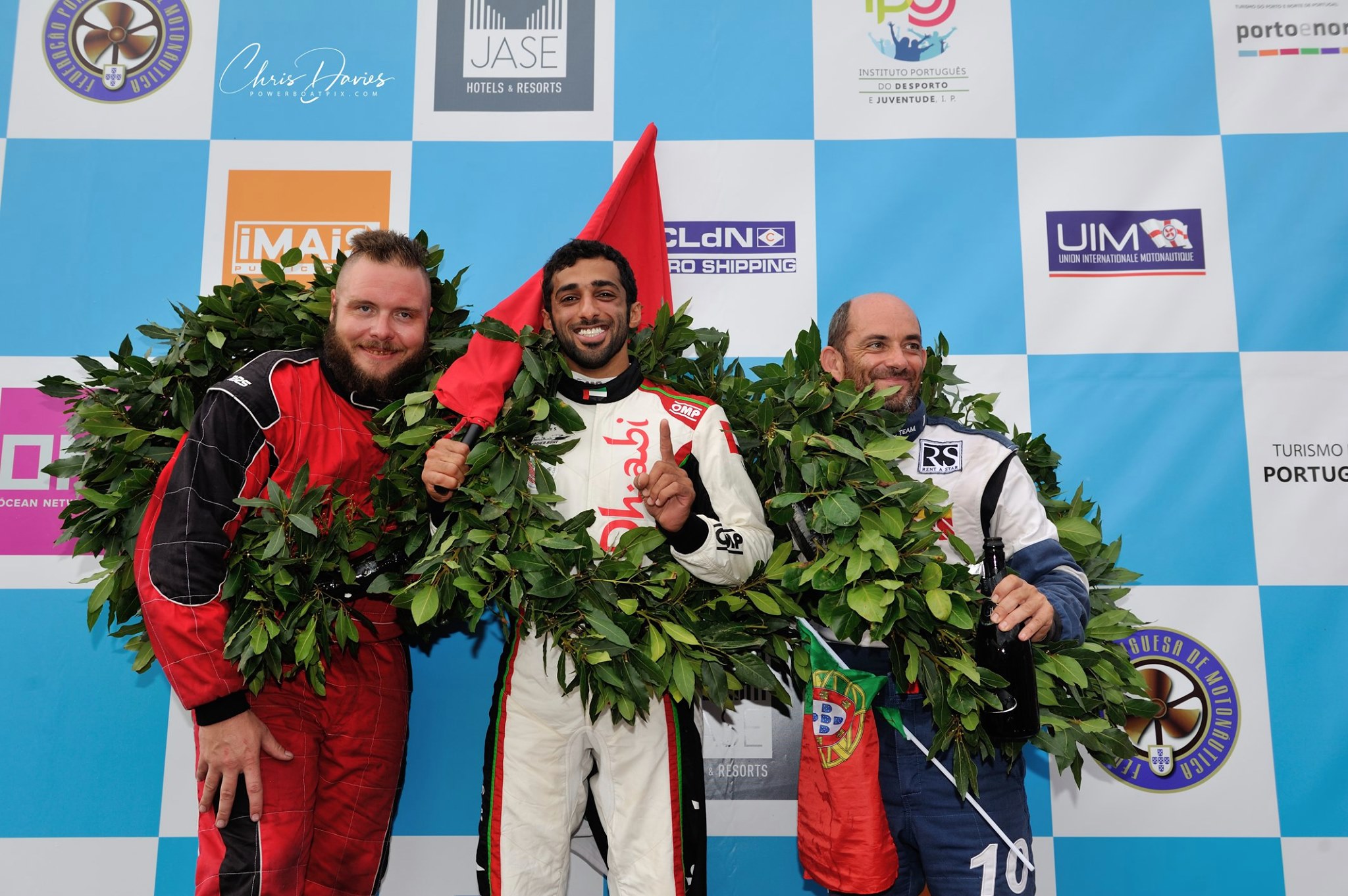 It might have taken three starts, including a rolling one but it did produce one outcome that many in the pit lane were delighted with and that was Rashed Al Qemzi securing the 2019 UIM F2 World Championship title.

The result, which is still subject to an appeal to be heard at a later date, sees the Team Abu Dhabi racer leave the Grande Premio de Portugal held in the beautiful surroundings of Ribadouro, Baiao with a thirty-seven-point lead over his closest rival Duarte Benavente. With only twenty points available to the winner of the final race, the Abu Dhabi Grand Prix, the local team can now start planning the celebration for when all the teams arrive in early December.

Meanwhile many of the thousands of spectators that had lined the banks of the Douro River had hoped to see their local hero Benavente finish with his third podium place in three years and he didn’t disappoint them, taking a well deserved second place. “I’m quite happy with second” said the Portuguese driver, “starting from eighth on the grid didn’t help my chances of securing a win, but then my boat is not designed with Q3 in mind. I hate the way the ‘Shoot-Out’ works because we don’t race by ourselves so why should we qualify that way? A while ago I was able to fight for the pole position but not with this boat anymore. Maybe I will have something that will surprise a few people in Abu Dhabi.” “Perhaps a new haircut” said Benaventes’ boat builder David Moore, when asked to comment.

Third to cross the line was the Sharjah Team driver Ferdinand Zandbergen, but whilst he was waiting at the podium for the prize giving to commence news began to filter through that the Dutch driver had been given a one lap penalty for a clash of boats at the first turn that had seen Stefan Hagin barrel roll out of the race. In the impact Zandbergen had lost his rear BaBa cowling but this was rushed back to the start jetty, where the remaining boats were lining up for a restart, so that he could join them.

With the one lap penalty applied it meant that Ola Pettersson would move up to third place on the podium. “I had a messy Friday and Saturday but a ‘Brindisi’ style Sunday” said Pettersson. “It might not have looked like it but that was a long rough race for me, especially as I seemed to be making a habit of starting low down on the grid, leaving me to fight my way through each time. The only advantage starting that far back is that I can avoid all the carnage happening in front of me.”

The carnage he was referring to didn’t just happen on the opening lap because right after the second start the rescue divers were called upon once again. This time it involved Edgaras Riabko cutting in front of Daniel Segenmark before reaching the first turn. The spray from the Lithuanians DAC sent Segenmark flying through the air only for him to land on the poor unfortunate Owen Jelf. In the confusion Johan Osterberg ended up barrel rolling violently over. His impact was so severe that he was rushed to hospital complaining of a back injury. Fortunately for him he was later released after being thoroughly checked over.

Out in front while all this was going on was Tobias Munthe-Kaas who had made a blistering start to get ahead of Al Qemzi. His lead was short lived though following the Hagin crash. In the restart Al Qemzi got the better of the Norwegian driver and would maintain that lead right up to taking the chequered flag. For Munthe-Kaas though his day would be cut short when his propeller lost a blade and he was forced to retire.

With the race finally over the first person to greet the new World Champion was his boss Guido Cappellini, a man who knows a thing or two about winning world titles. “Can you imagine my surprise when I saw Guido standing there with the UAE flag” said Al Qemzi. “He then jumped into the cockpit and drove me around on my victory parade lap. To have a ten times World Champion drive me was a huge honour” said Al Qemzi. “Finally, I made a good start from the pontoon” he continued. “After Brindisi we went back to the factory to start to find a solution to my poor starts. When I saw Munthe-Kaas get ahead of me I though here we go again but then I thought ok let him go I’m happy with second, then the red flag came out and I knew I had a second chance. Once we got back under way, I then heard about the second crash and was told it would be a rolling start I just knew it would be my day.”

With the final round taking place in early December the teams will now be hard at work getting several of the boats repaired before they are shipped off to the UAE. Joining them will be Britain’s Steve Hoult after he finished a superb tenth place and scoring that magical point that adds him to the list of competitors who are being offered assistance to compete in Abu Dhabi. “A suntan for Christmas, that will do nicely” he said.