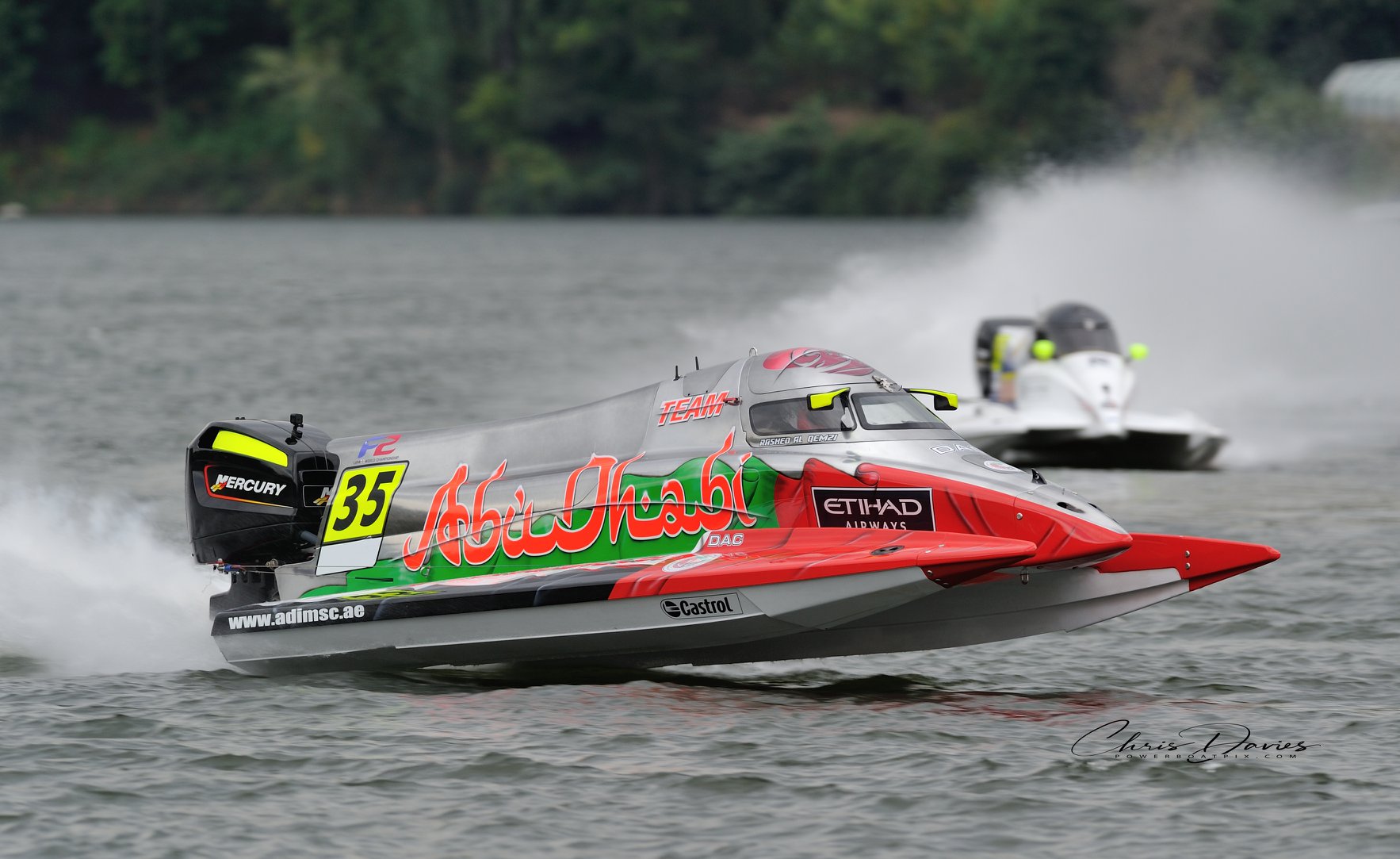 Following last night’s extremely well attended Welcome Gala Dinner featuring local Baiao cuisine, including traditional smoked sausages amongst the many delicacies, it was time to get down to the business of qualifying for the UIM F2 Grande Premio De Portugal.

During Saturday morning’s Drivers’ Meeting, Pelle Larson, the UIM F2 Race Director, who also oversees the homologation process at the various race circuits used, felt confident enough to increase the number of racers permitted to compete on the Albufeira Da Pala circuit to twenty-one. This meant that the Sunday lunch time Repechage Race would no longer be required much to the delight of the racers, may of whom had driven thousands of kilometres to get to Ribadouro.

Perhaps this had taken some of the pressure off the racers because for the first time in four years the ‘Free Practice’ session past off without involving the rescue divers getting wet. The only driver who needed assistance was Mette Bjerknaes whose prop shaft snapped sending her favourite ‘Brindisi’ propeller to the bottom of the riverbed.

For only the second time in three years the whole field of entries headed out for Q1 in near perfect water conditions around the 1765 metre course and straight away it was Rashed Al Qemzi who set the quickest time. Amongst those not progressing out of the session included the British driver Steve Hoult who was making a welcome return to the World Championship. Brent Dillard would also be heading back to the pit lane after showing so much promise earlier in the day. “Perhaps changing the engine over was not the smartest thing to do today” said the bitterly disappointed American racer.

That left just fifteen drivers for Q2 and once again the main protagonists in this years title challenge all comfortably made it through, Bjerknaes was not having the best of days though as after just three laps she was heading back to the pits for the team to carry out repairs to the Moore’s dashboard. Also joining her on the side-lines was Bimba Sjoholm, engine issues had been plaguing her for most of day, a similar fate had also brought a halt to Team Abu Dhabi’s Rashed Al Tayer who had struggling with an engine down on power.

So, that left us with the top ten ‘Shoot-Out’ and first away should have been Ola Pettersson, but a last-minute propeller change along with a miss communication meant he missed his slot, “My radio-man only heard Pelle Larsson ask once if everyone was ready” said a frustrated Pettersson. “Then they told me I had missed my turn and would get no opportunity to post a time. I was really pissed but managed to keep my cool when I spoke to the race officials’; it’s going to be Brindisi time all over again for my race tomorrow.”

Making his first ever top ten ‘Shoot-Out’ was Ahmad Al Fahim from the Victory Team. “We have made the boat more stable to handle due to some aerodynamic changes” said Al Fahim, “As it’s my first season of racing F2 it’s become more a learning year for me. I have to thank the Victory Team guys around me along with the new management because at last we are finally going in the right direction.”

Another UAE driver also going in the right direction was Al Qemzi. Although it had been Hagin that had originally qualified with the quickest time and would head out last of all, the Team Abu Dhabi driver set about putting a really fast lap together even though he was still getting to grips with using a bigger propeller than last year following some alterations to the course. “Our goal has been to get enough points to win the championship” he said. “Today I put together a perfect lap, tomorrow I will need to do that probably thirty-eight times.”

As Hagin headed out to see if he could snatch the pole position from the UAE racer the heavens opened and down came the rain. “I know my Molgaard hull works well in choppy conditions but as soon as it started to rain the wind dropped and I knew I would struggle to beat the time set by Al Qemzi” said the German driver who will start from fourth on the grid.

Lining up alongside Al Qemzi will be Tobias Munthe-Kaas and just nine hundredth of a second separated them. “Looking at that time shows we are there matching their level” said the Norwegian driver.

Also putting in another fine performance was Daniel Segenmark, who finished second overall at the first round of the championship back in Kaunas. To begin with the Swedish driver had struggled picking the right moment to post a quick lap with so many other racers out on the water. He did eventually make it through and will line up in third place on the grid. “Tomorrow will be tough, especially in the start” said Segenmark, “let’s see if we all make it off the line when the lights go out, if anyone struggles then I will make that opportunity count.”

With the start of the Grand Prix unlikely to be a rolling one like we saw in Brindisi everyone will be watching to see if the man in pole position can get off the start line. “We have been working very hard on the starts” said Team Abu Dhabi’s Guido Cappellini. “I think ninety-nine per cent the problem is resolved but there is always that one per cent that concerns me.”

The Grande Premio de Portugal gets under way at 15:45 local Portuguese time (GMT +1) and will be broadcast live on the television channel, RTP 2.
It can also be viewed online at https://www.rtp.pt/play/direto/rtp2…