The final round of the 2019 UIM F2 Powerboat World Championship finally got under way today with the first ‘Free Practice’ session for the Grand Prix of Abu Dhabi.

As most on-lookers expected the quickest time posted today was that set by Rashed Al Qemzi, the 2019 UIM F2 World Champion. It wasn’t that straight forward though for the local hero. After carrying out some testing duties for the team he jumped into his DAC raceboat only to find the battery had gone flat. With the sunlight rapidly fading he managed to go out for the final ten minutes of the session. By that time there were only a small number of raceboats on the 1.9-kilometre circuit which he obviously used to his advantage when he posted a time 45:25 seconds.

Today went well but tomorrow is another day

Second quickest was Tobias Munthe-Kaas in his BaBa hull with a time of 45:53.

We’ve been improving all the time

I got the answers I required, so for me it was a good session.

The final driver to post a sub 46 second lap time was Duarte Benavente with 45.90. It was a remarkable time set by the Portuguese racer because he was using an unfamiliar Moore hull.

I’m very happy with that

The boat is completely new to me; it was the last new F2 Moore to leave the factory in France and now we are putting it to good use.

Friday will start with a second ‘Free Practice’ session followed by Qualifying for the Abu Dhabi Grand Prix at 15:30 Abu Dhabi time. 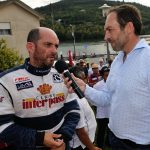