The Emirati driver largely dominated the opening day of the new season, and team-mate Mansoor Al Mansoori also produced an impressive display to qualify in third place for tomorrow afternoon’s first round of the 2022 championship.

I was just waiting there to see if anyone would break my time. Then it got rougher on the far side, and I thought no one is going to beat that.

Al Qemzi had set down the fastest time at the start of the six-boat qualifying shoot out before it was halted by a yellow flag after American Brent Dillard hit a buoy.

Pushing a little too hard. I had just changed the prop and as I was heading towards the right hander the engine was all the way out. I then feathered the throttle and the nose dropped. As soon as that happened it turned right straight into the buoys. Honestly, I feel really bad as the team have all worked really hard, but hey I love this new boat

It was the slowest crash that I have ever had. What I had not realised was the boat had taken on water and had too much weight in the right-hand sponson, so going into the left turn over it went.

Prior to the race several drivers discovered that their race helmets no longer met the requirements and some of those drivers that had spare helmets that did were able to lend them out. Johan Osterberg kindly helped out Munthe-Kaas but what the Norwegian hadn’t realised was that Osterberg had competed with that helmet on three previous occasions, each time crashing out!

Despite the interruptions, Al Qemzi was untroubled as he claimed pole ahead of German Stefan Hagin.

We were remarkably close two/tenths off pole, but I was lucky to get second as a few times I hit the wake of spectator boats. With just three minutes to go I could have gone for another quick lap but then better settle for second rather than take the risk.

In free practice the German had struggled with propeller choice even though he had carried out a significant amount of testing prior to Poland.

After free practice I wasn’t sure whether it was the prop. Then in qualification I realised it was not the prop that needed changing but rather my driving style. I now have a big chance here.

Certainly, another threat to the reigning F2 World Champion comes from his Team Abu Dhabi teammate Al Mansoori who certainly gave everyone an early warning that he could emerge as a serious contender this season. He is racing the DAC that Al Qemzi used last year to claim the title.

That was my best ever qualifying result. The boat is amazing to drive, and I can see how my teammate was able to win with it. I will push him tomorrow one hundred percent.

Earlier in the day Al Qemzi had recorded the fastest lap in this morning’s free practice session from Munthe-Kaas, with Al Mansoori setting the fifth best time once again underling his credentials. That form continued into the afternoon’s first of three qualifying phases, although the triple world champion was content to finish second to team-mate Al Mansoori on this occasion. Munthe-Kaas and Team Sharjah’s Sami Seliö were third and fourth quickest in the initial twenty-minute session, which sent the top fifteen drivers through.

Al Qemzi powered his way into the six-boat shoot-out by dominating the second qualifying session ahead of American Brent Dillard, Munthe-Kaas and Al Mansoori in fourth place. Also making the final qualifying session was Giacomo Sacchi but he was unable to complete it after he ran out of fuel. The problem was that his team had only allowed for him to race ten laps in Q2 but he completed twenty. Then with no time to refill the DAC before Q3 got underway it wasn’t long before the rescue teams were heading for the Monegasque.

With course approval now increased to twenty-two competitors, those who wish to go out for Free Practice will have that opportunity at 11:30 for forty-five minutes. The Grand Prix of Poland will then get underway at 16:00, with prize giving at 17:00.

There will be a Live Stream available of the Grand Prix via https://youtu.be/yX3cltNn7lE 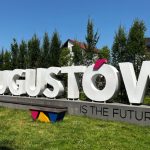