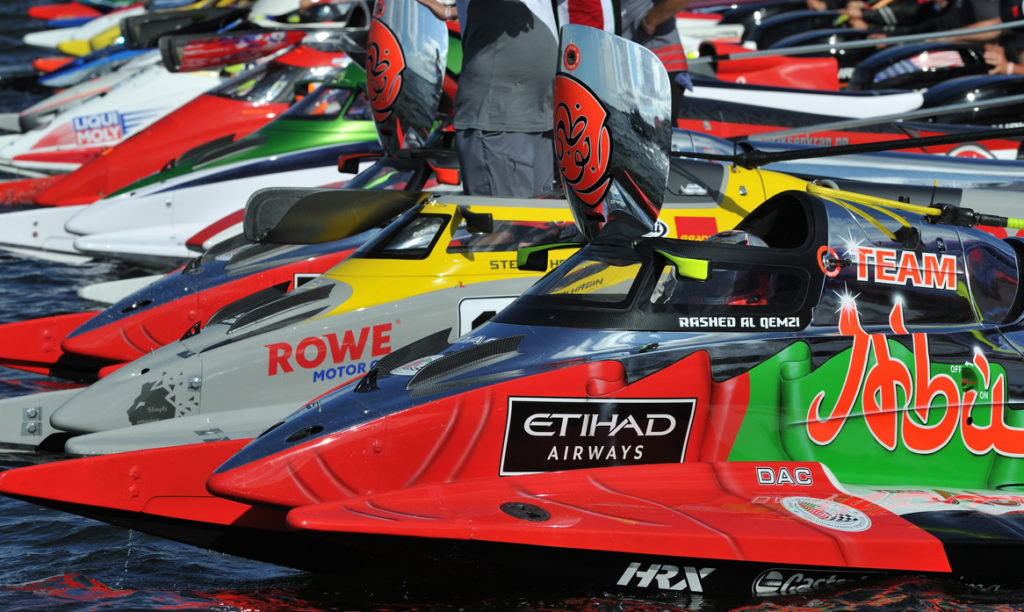 Team Abu Dhabi’s Rashed Al Qemzi is all set to get his pursuit of a fourth UIM F2 World Championship title back on track this weekend at the Grand Prix of Lithuania.

The Emirati driver is determined to shrug off last month’s setback in Poland where he had to take avoiding action when as the leading boats were working their way through the backmarkers Bartek Marszalek briefly opened the door to let the Emirati driver through.

Unfortunately, before he had a chance to lap him, the Polish racer closed the gap and the Team Abu Dhabi driver spun out and lost his race cowling which brought his day to a premature end.

After my clash with Osterberg I still came through to take the title and I still have a good chance this time especially with this brand-new boat. I believe I would have won in Poland but for a mistake by another driver, but that’s behind me now and of course I’m aiming for a win in Lithuania.

His Abu Dhabi team-mate Mansoor Al Mansoori’s second place in Augustów behind Stefan Hagin underlined his own credentials, and Al Qemzi believe he could do very well in the championship.

Al Mansoori’s is improving all the time, and he has a great future in F2. The management at Abu Dhabi Marine Sports Club choose the best to represent the team, and he has what it takes to get to the top.

Holding second place in the championship, Al Mansoori is prepared for another big challenge in Kupiškis in the boat which took Al Qemzi to the world title last year.

The result in Poland has given me a lot of confidence. It showed that I can compete with the guys at the top in F2 and motivates me to fight for another good result in Lithuania. My focus is to finish in a good position. I’m still fairly new to F2, still building and gaining experience. I want to support Al Qemzi and at the same time follow his steps, and it’s an honour to be driving the boat of the three-times world champion.

The Team Abu Dhabi duo are in a powerful line-up of potentially twenty boats assembling in Kupiškis, where Lithuania’s Edgaras Riabko will be aiming to complete back-to-back wins at his home event.