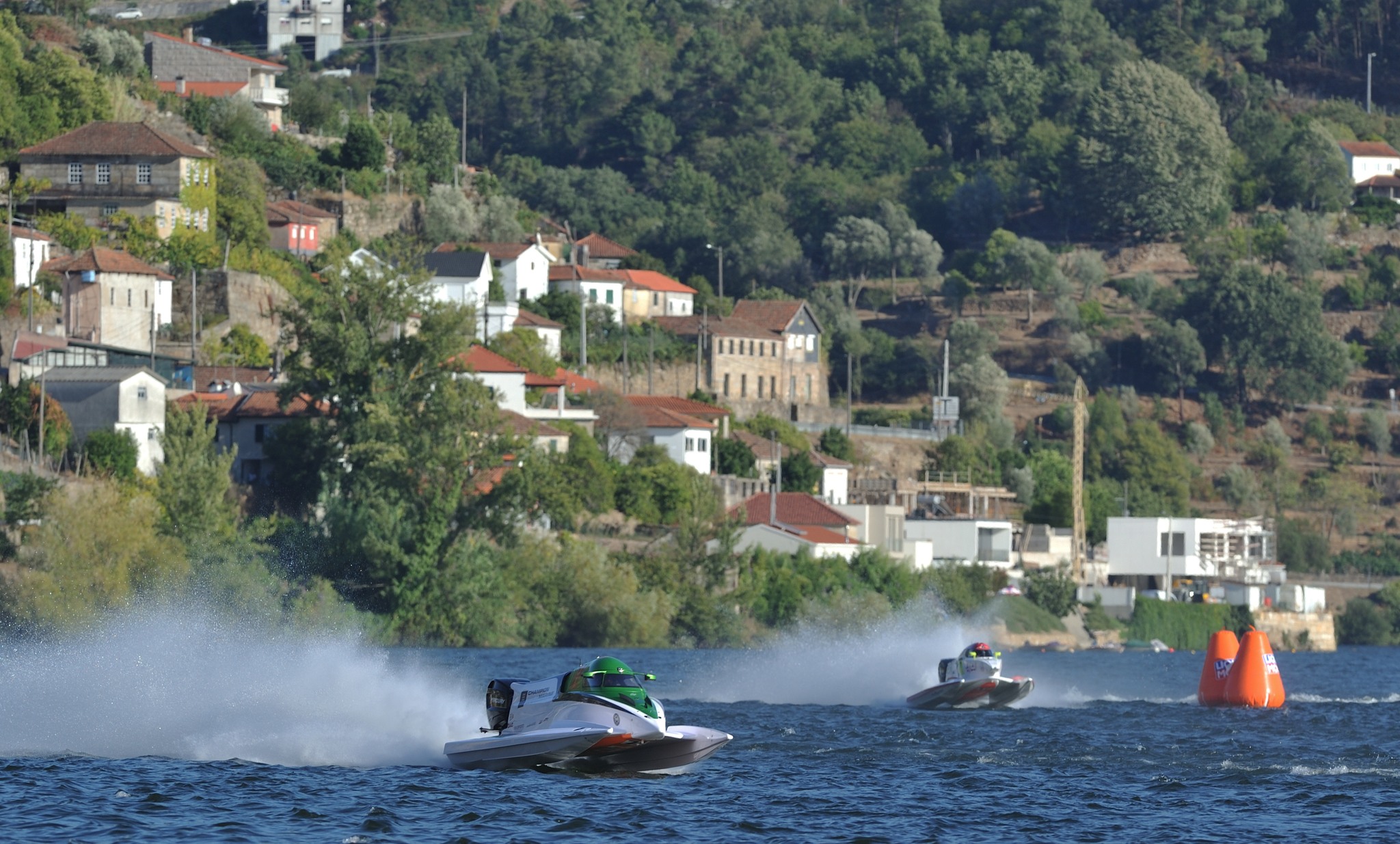 Last weekend Giacomo Sacchi went one better than his Monégasque friend Charles Leclerc did in Monza, when he raced from pole position to take the chequered flag forty laps later at the Grand Prix of Baião in Portugal.

Seventeen drivers had lined up on the Douro River circuit start pontoon with Sacchi on that all important number one spot. Lining up alongside him was the current UIM F2 World Champion Rashed Al Qemzi and next to him was the local fans favourite Duarte Benavente who had not been off the winner’s podium in Portugal since 2017, so no pressure then.

After a slight delay whilst the start lights were adjusted the pack sped off to the first turn mark which they all safely negotiated. Out in front had shot Sacchi, followed by Al Qemzi, meanwhile Sami Seliö had past Benavente for third.

“Decent start for a change” said Seliö, “I saw in my mirror that Benavente did not make such a good one as me, so I left him some room on my inside at the turn mark. It’s almost one hundred and eighty degrees turn so quite tricky.”

It wasn’t long though before Seliö then found himself up in second place as first to drop out just ahead of him was Rashed Al Qemzi. The Team Abu Dhabi driver suffered a Mercury engine failure, then just two laps later Benavente dropped out with exactly the same piston failure as the Emirati.

By the half way point in the forty-lap race Seliö began to close the gap on Giacomo Sacchi, though navigating their way through the backmarkers was now beginning to become extremely difficult for both of them.

Mette Brandt Bjerknæs had arrived in high hopes following her points scoring race in Lithuania. Having qualified in ninth place she looked on track to add to her total here in Portugal but she was left heartbroken when her engine seized mid race. “Incredibly devastating when so much hard work has been put into preparing for this race” she said. “I had tears in my eyes and a lump in my throat when I was being towed back to the pontoon by the jet ski. Absolutely gutted.”

Back in the pack a superb battle had broken out between Sam Whittle and Colin Jelf. Lap after lap Jelf, the three times World Champion tried his hardest to pass his younger fellow countryman and each time Whittle held him at bay. It would continue like that till the very end and resulted in Whittle collecting his first championship points that would also see him become the top British racer so far in this year series.

At the front Sacchi’s lead ebbed and flowed whilst Seliö, still in second, was now coming under increasing pressure from the JRM driver Brent Dillard, who had the former F1H2O World Champion Jay Price as his radioman urging him on. “I could see Dillard in my mirrors as he was getting really close” said Seliö. “I was trying to focus on keeping the boat the right way up, so those last few laps were really exhausting.”

In the end it would be the Monégasque driver who would see the chequered flag first to the absolute delight of his team gathered on the pontoon to meet him as he came back to the pits. “I knew if I made it out of the first turn with the lead, then victory today would be mine” said Sacchi. “I really struggled with the back markers some of whom were correct and some not so. The objective is to repeat this in Villa Velha de Ródão next weekend. It’s tight there so getting that pole position will be the most crucial ever, and I really hope that the title is not decided by the actions of a backmarker.”

“That was tough out there” admitted Seliö, “I had some great top speed today as the prop I used was a big one. I thought perhaps it might have been too big but if you look at the result then maybe I made the right choice.”

Crossing the line in third place was the American driver Dillard. He had struggled from early on in the race when his powered trim developed an issue leaving him with only twelve volts instead of twenty-four. He was extremely proud to become the first American driver to carry the Stars & Stripes to the podium in the modern era of F2.

Unfortunately, his joy was short lived though as following the obligatory technical inspection at the conclusion of the race the UIM Technical Commissioners discovered an anomaly with the cylinder heads fitted to Dillard’s Mercury engine.

The JRM team later released a statement expressing their ‘deep embarrassment’ and that ‘most know that this is not the behaviour that JRM follow in regard to following the rules within our sport and apologies to all our fellow competitors and the UIM.’

Following that decision Edgaras Riabko then moved up to third place, the Lithuanian drivers best result so far this season.

“My first thoughts when I saw Steve Dillard walk into my pits with the trophy were what happened back in 2019 in Abu Dhabi” said Riabko. “That time I was disqualified and was handing the trophy to him. I actually feel sad for Brent Dillard because I honestly don’t think he knew his engine was illegal. Will this result help me in the championship, I’m not so sure because the top three drivers are so far ahead in the points. What I do know is that there will be a big fight in qualifying next weekend between those guys. I just need to remain calm and perhaps pick up the pieces if it all goes wrong for them.”

Bimba Sjöholm was able to thank to her loyal sponsors who helped her to get her Mölgaard hull repaired prior to making the trip to Portugal, with a ninth-place finish and her first points on the table this year.

Rounding out the top ten was the French racer Fabrice Boulier who secured his first ever UIM F2 World Championship points score. “A nice tenth place today with some great team work on our new boat, it’s getting better day by day. See you next week at VILLA!”