Following his return to the winner’s podium in Kupiškis at the Grand Prix of Lithuania, Sami Seliö, from the Sharjah Team continued his momentous climb up the 2022 UIM F2 World Championship points table with yet another second-place finish, this time at the Grand Prix of Baião in Portugal.

Starting from fourth place on the grid the Finnish racer made a good clean start as the red lights went out and was quickly ahead of the local hero and good friend Duarte Benavente.

“Decent start for a change” said Seliö, “I saw in my mirror that Benavente did not make such a good one as me, so I left him some room on my inside at the turn mark. It’s almost one hundred and eighty degrees turn so quite tricky.”

It wasn’t long though before Seliö found himself up in second place as first to drop out ahead of him was Rashed Al Qemzi. The Team Abu Dhabi driver suffered a Mercury engine failure, then just two laps later Benavente dropped out of the running with exactly the same piston failure as the Emirati.

By the half way point in the forty-lap race Seliö began to close the gap on Giacomo Sacchi who had led from the start, though navigating their way through the backmarkers was now beginning to become extremely difficult for both of them.

“You think they leave you room, then close the door on you, problem was not only mine but also for Sacchi. If they don’t listen to their radioman, then maybe the UIM need to get tougher, maybe issue grid penalties in their next race, as yellow cards are obviously not working.”

Getting ever closer to Seliö was the JRM driver Brent Dillard, who now had the former F1H2O World Champion Jay Price as his radioman urging him on.

“I could see Dillard in my mirrors as he was getting really close” said Seliö. “I was trying to focus on keeping the boat the right way up, so those last few laps were really exhausting.”

With the chequered flag bringing a conclusion to the race Seliö’s second place finish means he now moves into second overall in the points table just three behind Mansoor Al Mansoori who came home in sixth place.

“That was tough out there” admitted Seliö, “I had some great top speed today as the prop I used was a big one. I thought perhaps it might have been too big but if you look at the result then maybe I made the right choice.”

If you look back through the recent history of this championship you will see that back in 2009 the Dutch driver Johan Coenradi won the title that year in a series that consisted of just four rounds but he didn’t win any of them. If the result that happened in Ribadouro happens in the final round of the 2022 UIM F2 World Championship taking place in Vila Velha de Rodão this weekend then Seliö is World Champion. 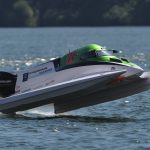