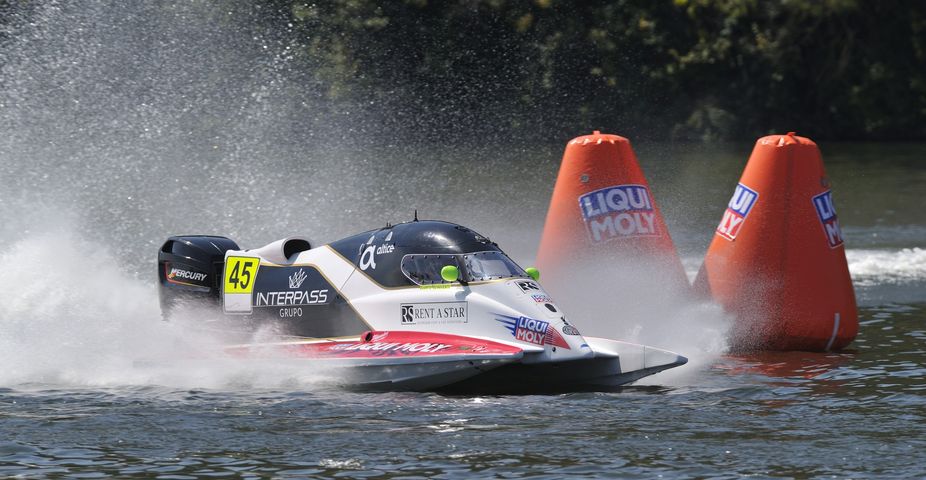 Duarte Benavente will start the final round of this year’s UIM F2 World Championship, the Grand Prix of Vila Velha de Ródão, in Portugal from pole position much to the delight of the Liqui Moly Portugal race sponsor who also back the veteran driver. “I’m really happy for my sponsors who have backed me throughout the last few seasons.”

Lining up alongside him will be Tobias Munthe-Kaas, who has suddenly found the perfect set up for his BaBa hull. “The boat feels perfect now but it’s taken a lot of hard work, so I’m extremely thankful to my team. We had a few issues at the last round concerning the engine trim but now these have been solved.” The Norwegian racer is also grateful to his mechanics after they came across a problem with the engine that they didn’t even realise existed giving him more top end speed.

The Sharjah Team’s Sami Seliö will start in third place and is one step closer to securing the 2022 world title. In order for Seliö to secure the 2022 title his first job must be to close the three-point gap to the current championship points leader Mansoor Al Mansoori whilst staying ahead of Stefan Hagin who will line up alongside the Sharjah racer for the forty-five-lap race. So, if he finishes ahead of both Al Mansoori and Hagin he takes the title.

“I tried everything I could today to set the fastest time in the final qualifying session but my perfect lap just didn’t come” said Seliö.

Seliö and Benavente both use this stretch of water located at Vila Velha de Ródão to test on and although they are both good friends off the water Seliö knows that he won’t be getting a ‘free pass’ from the local driver. “I have to do my job and he has to do his, and we are both here to race hard.”

Stefan Hagin admitted that he found qualifying tougher than he had expected and at the end both Seliö and him finished the final session with identical times, the Team Sharjah driver was classified third due to setting his time first and the German fourth. “When you check the times, you can see how very competitive this class is. So, now I must switch my focus to the race.”

Fifth on the grid will be Edgaras Riabko, which surprised the Lithuanian as he had struggled throughout Free Practice when he was testing some new propellers in readiness for next year. He then set about changing the balance of his DAC which instantly brought him the results he was looking for. “Now I will concentrate on making the best possible start because I’m confident that when that light goes out, I can make it to the first turn buoy with a good lead.”

Bimba Sjöholm continued her recent excellent form when for the second race in a row she made the final top six even though she had lost the use of her power steering. When she realised the issue, she knew any chance of improving her grid position had gone. “Everyone is so fast out there and it appears I am too” she said.

Two years ago, Benavente secured pole position for the UIM F2 Grand Prix of Vila Velha de Ródão. The following day to the delight of the crowd the Portuguese driver went onto take victory, can he repeat this feat again.